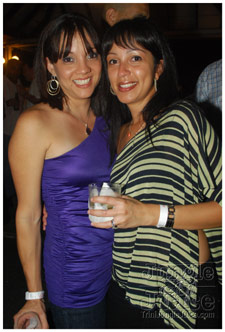 Special thanks to Gruff for having TJJ up in de mix! It was our first but definitely not our last :-)

CROWD:
Right from the start we knew this party was going to live up to its reputation of being an event not to miss. Why we say so??!! If you see cars ... Well after finding a park on the outskirts, one of the many shuttles quickly scooped us up and we were on our way. At the door we lingered for a lil' 5 mins and from our observations, we noticed the steady inflow of patrons. Definitely no buss fete! Folks present were mostly more of a mature age group in which most were clad in trendy, fashionable and sexy apparel, no doubt dressed to impress.

VENUE/ACCESSIBILITY:
The venue was not too difficult to find. Ample parking was available with security on foot patrol for patrons' safety. Regular shuttles made the journey to the fete's front door much more convenient as well. On the inside there was a large main bar on the left side, a smaller cocktail bar on the right closer to the back, several food tents further up on the right and a main stage straight up in front. It was an outdoor fete subject to the night's cool breezes, which all took place on a pitched surface.

VIBES:
There was an overall vibe present. Of course as alcohol consumption becomes more prevalent, this vibe normally tends to increases and so things did get more exciting as the night progressed. DJs High Fidelity & Less than Zero was some what responsible for this phenomenon, as well as Kes the Band who gave quite a lengthy performance leaving folks in a frenzy.

SERVICE:
The bartenders were cheerful and pleasant and seemed to satisfy most of the patrons requests during the night's course. It was pretty much the same story at the food stalls as well, but the free eats it did run out before the fete was over however. Another little bit of disappointment occur at the bar as well coming to the end of the fete. The time frame to get a drink seriously went up as compared to earlier in the night. We are not too sure what caused this.

COST/VALUE:
The party carried a price tag of $295.00 TT. Not bad considering the variety of premium alcohol offered, the free food and the live performances. Lets not forget all those maxi running shuttle service getting patrons to and from their vehicles with a wait period of ZERO  ... nice!

FOOD/DRINKS:
The event was a Drinks Inclusive affair. Now right from the get go there were promotion booths offering patrons a variety of drinks to indulge in. Those who were not too interested in that and wanted more of the premium stuff, simply had to step up to any bar and order away. From Tequila shots to Cocktails ... whatever you wanted. What also added a nice classy touch in our minds, was the fact that all drinks were served in glasses. No plastic cup and ting! On the food side, party staples such as Corn Soup and Doubles were available for FREE and then there were other assortments on sale for those who really liked variety.