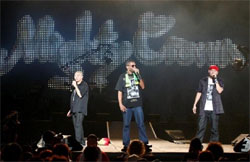 On Saturday, August 16, 2008 in Yokohama, Japan was far from an ordinary day for Irish and Chin, Inc. clients, top-of-the line sound system and entertainment outfit Mighty Crown, phenomenal Dancehall artist Mr. Vegas and the stimulating dance crew High Energy.  Impressively, this day commemorated the 17th anniversary of Mighty Crown in a colossal way, with a record-breaking 40,000 birthday guests in tow to share the experience.

Mighty Crown, who is fresh off the heels of a sold-out European tour, celebrated their birthday in style, spinning hits for their fans and well wishers. At any given moment during the show, they blasted the sounds of top Dancehall selections, which rippled through the packed arena. From start to finish, Mighty Crown's performance consistently evoked a roaring crowd.   In addition to Mighty Crown dropping Reggae favorites, ace selector Sami T also donned the role of artist, lacing the venue with some of his latest music.

"We are more than pleased with the outcome of Yokohama Reggae SAI,"declares Sami T of Mighty Crown.  "We never imagined that the event would evolve from 150 in attendance to 40,000..........over the years, we actually focused on the quality of the event rather than quantity."

But Mighty Crown couldn't rightfully take center stage for the full night because there were many acts to follow, including those from their Lifestyle Records imprint like Papa B (20 year music veteran) and a number of high profile Japanese Reggae artists.  And of course, there were the special guest artists from Jamaica, who were kept a secret until that night.

The excited crowd erupted in applause when none other than Mr. Vegas took center stage.  He rocked the swollen venue for his entire energetic set, capturing the undivided attention of his Japanese fans.  Mr. Vegas consistently delivered flawless selections of timeless classics, new gems and his smash hits in Japan "Do You Know?" and "Up and Live." Mr. Vegas was last in Japan on a Mighty Crown tour in 2006.

"This is indisputably the largest audience that I have performed before in my career," says Mr. Vegas enthusiastically.  "Japanese fans have a committed love of Reggae/Dancehall music, making this opportunity more than worthwhile."

A climactic moment of Mr. Vegas' stage show was a performance of High Energy, his background dancers that constantly bring the fire with pulsating dance moves and acrobatic feats.  Throughout their segment, they received monstrous forwards. Led by Boricia Anthony Brown and Tishana Ellis, High Energy is blossoming in recognition, with requests for appearances through out the world. 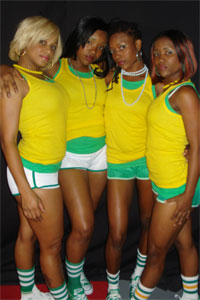 "As this is our first time in Japan, the experience has been quite rewarding," says Tishana.  "Clearly, Japanese fans hold the 'dance' element of Dancehall culture with high regard, as evidenced by the outpour of appreciation we are receiving," added Boricia.

Other Jamaican artists on the Yokohama Reggae SAI line up include top crooner Wayne Wonder and the wildly popular Bugle.  In past years, the festival has boasted the likes of Beenie Man, TOK, Tony Matterhorn and Daville.   Each year, the special guest artists from Jamaica are not formally billed for the event, rather they are a surprise.

Yokohama Reggae SAI was conceived in 1995 by Mighty Crown as a means of celebrating their anniversary in the business and highlighting Reggae/Dancehall entertainment in Japan.  The festival continues to grow in magnitude and visibility.  Plans for next year's Yokohama Reggae SAI are already under way.