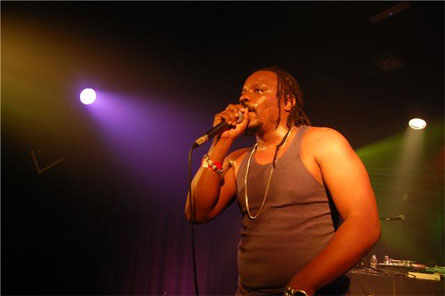 On Monday afternoon reggae recording artiste Chuck Fenda returned from a successful stint in Antigua, the occasion saw Fenda headlining a concert at the famous Coast Night Club to a standing ovation as he brought the curtains down on a spectacular two hours set.

According to Black Spider Promotions, the promoters of the event “The show was wonderful and Chuck gave an excellent account of himself performing for over  two hours, his set was so well received,  we are now looking to book him for another assignment in February or March next year. His ‘Bad Boy’ video was also premiered on K45 TV and is already ripping up the airwaves on Sun Radio, Vybz FM and Hitz FM” – He said.

However with a blooming career spanning almost a decade including the release of his new bestseller album ‘Fulfillment’, Chuck Fenda has decided it’s time for a transformation and has adopted a new moniker onto himself. The singer said as of now he wants to be referred to as ‘The Living Fire’, a name he describes as being fitting for his newly transcended persona.

“People always called me ‘Chucka Fenda’ or ‘Poor People Defenda’ or ‘The Living Fire’ so I decided since I’m on a musical mission to rid Jamaica and the world of negativity, wickedness, corruption and evil doers. You need a name that when people hear it them know say a judgement when them see me a come”.  – Fenda said.

“A nuh nothing new, but me a make it official now a it me a work wid, but if people still want to call me Chuck Fenda nothing nuh wrong wid that as long as them know say a righteousness we stand for” – He added.

Meanwhile The Living Fire is scheduled to make an appearance on GT Taylor’s Christmas Extravaganza on December 25th, Sting at Jamworld, Portmore on the 26th and Original Dancehall Jam Jam on December 31st.

Come January 2010 the ‘Gash Dem and Light Dem’ singer will focus his attention on a two weeks tour of the United States making stops in Texas and California before returning to the island on January 28th.