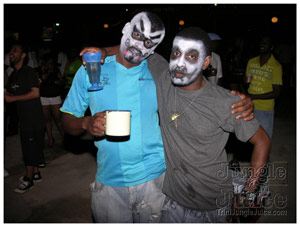 Even though Hypa Hoppa said that this is it... the final curtain call, I personally believe that after he recognized the love and support patrons and celebrities alike gave him that morning, there will be another project coming from Hoppy in time to come.

CROWD:
The final Children Of 80's party didn't bring out the maximum amount of people that the Pier 1 venue could've accompany, but nevertheless; the waves of people that filled the party was still a site to see. Equipped with coolers, drinks, and even costumes to pay tribute to the late and still great Michael Jackson, this party can be remembered as a "Trini" styled memorial for Michael Jackson that was overdue. The masses really began coming in approximately between the early hours of 4:30 to around 5 a.m. Celebrities such as Dawg E. Slaughter, Devon Matthews (wearing a replica of Michael Jackson's trademark attire) and General Grant came to show their support by entertaining the crowd with their old hits from then to now. Other local celebs like Umi Marcano, Dancing Jade (both members of the HD family) and DJ Titan came to enjoy the vibe of the crowd and party itself.

VENUE/ACCESSIBILITY:
The final curtain call was at Pier 1 Chaguaramas, which is well known for holding great parties, fetes and events; and this installment was no exception. the venue was well decorarted with lights, Red Bull tables, life size posters displaying Michael Jackson, and a screen on-stage showing some of the old shows and cartoons of the 80's such as The A Team, and the darker yet most remembered, Batman.

VIBES:
At the beginning between the hours of 2:30 to around 4:30, patrons were being entertained by DJ Red, who fed them old school music from all genres such as rap, R&B, soca, reggae and dancehall; which back then was reffered to as "Dub". It was record breaking to hear how many patrons shout out to their friends "Yuh kno how long I ain't hear dat tune?!" which really brought home the whole concept of The Children Of The 80's which was to bring back old memories so that new one's can be created.

At 5:00 a.m Hypa Hoppa came on stage alongside DJ Merry Perry and from then, the party really got started. The audience were even more hyped when Hoppie brought General Grant on stage, who then performed great old school hits like "Pure Hate", "D  Shot Call" and "Rev D Engine." At 6 a.m, Hoppie was then joined on the stage by MC/DJ and Soca artist Dawg E. Slaughter and DJ Ishmael "The Demolition Man". Michael Jackson impersonators were then asked to come on stage to put on their best performance to some of MJ's greatest hits. The artists, DJ's and MC's definitely impressed. Patrons were then treated to an early dose of water from a fire hose to help cool them down from the morning sun. To both patrons as well as photographers, it was a site to see!