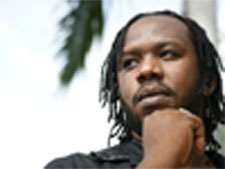 Reggae culture artist, Junior X a.k.a the Prince of the Battlefield kicked off his U.K. media blitz this past Sunday with Sir Daddy D on SFDCRadio.com!

Speaking to the music presenter live on air, Junior spoke openly about his career, and about his newly formed management relationship with Revolutionary Entertainment, describing it as the difference between working alone, and working with a team.

The artist also told his UK fans about his US tour, the highlight of which included sharing the same stage with reggae powerhouse Tanya Stephens.

Additional revelations from the artist (not heard before), include the fact that he, Kiprich and Vybz Kartel are cousins, and come from a family of singers and entertainers.  Probing his personality, Daddy D asked what type of person Junior X is behind closed doors, to which the star replied “I’m very humble in front of and behind the camera!”

Fans were given the opportunity to interact with the artist via the chat room, where they overwhelmed Junior with praises for his latest single Gangsta Life which speaks of the difference between listening to one’s mother, and the perils of living the gangsta life.  Daddy D noted that in his seven years on radio, he has never received so many requests to ‘pull-up’ the chune; “Junior has set the record” said the excited disk jock.

Junior X closed out the interview by stating “being an artist is not a title, but a responsibility” to which fans immediately demanded that promoters work together to bring the artist to the U.K. on a tour!