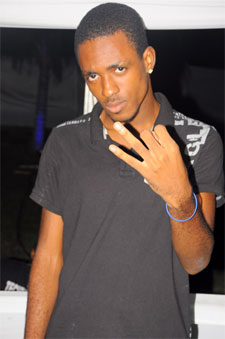 Darkcide Media and U.I.M recording artiste  Chedda, born Tyrello Johnson a savvy lyricist and one of Jamaica’s fastest rising young talent is steadily on a path to etch his name in the historical scribes of the industry.

Son of the legendary dancehall veteran Daddy Screw, this upcoming entertainer has nothing but music and the drive to excel thumping through his veins.

Last week at the highly anticipated Sting 2009 poster launch held at the Building formerly known as Asylum, it was revealed to the public that this blossoming talent was added to the star-studded line-up featuring the likes of musical tycoons Vybz Kartel, Mavado, Bounty Killer, Merciless, Nitty Kutchie, Aidonia, Assassin, Chuck Fenda amongst others.

Ahead of his December 26th debut on the greatest one night show on earth, Chedda is hard at work rehearsing for his biggest assignment since launching his career over a year ago.

Summer 2008, Chedda nabbed his first hit single with 'My Rifle' copping 5th position on the German Reggae Charts the song was produced by Craig Romani Gregory. Since then Chedda has released three new singles 'Stay Far' featuring Blak Diamon, 'Swagga' on the Fitz Riddim and most recently ‘Because A Likes’ on Supa Hype’s Four Thirty Rhythm now enjoying premium airplay on the radio waves.

Listen 'BECAUSE A LIKES' : http://www.youtube.com/watch?v=oLnphoLMoII