By Jonathan Mark©
Published on 11-Dec-09
From the start people put a limit on the prices on tickets so it didn't past $140. Kind of expensive for a ...
>> View A Royal Christmas Gallery 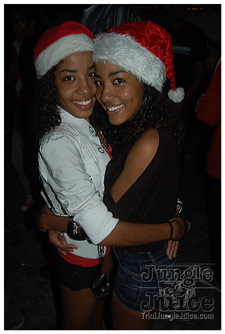 From the start, people put a limit on the prices on tickets, so it didn't past $140. Now although this is kind of expensive for a Cooler Party, it was well worth it! The DJ's mash up, and the promoters came through. 4Kings yuh large!

CROWD:
In this party, St. John's sell off. Just look at the pics and you would see the crowd. As I reach I was told immediately, "It have rel girls inside!!" Some people brought their coolers, others paid for their drinks. My only thing was if everyone was supposed to be "allowed" to drink but say what, it's Trinidad.

VENUE/ACCESSIBILITY:
Well it's St. John's... a big open space venue. I came,  I parked, I went inside. No real problems. 4kings is one of the few promoters in a while to ram out St. John's, so that was good party planning right there. Perfect size venue.

VIBES:
Boom the party was pumping. Everybody sweaty, everybody smiling, everybody having a time. The DJ's seemed to be more like live entertainment because that was the first time I saw people screaming for the mic man, yes! The only thing is after the party done, certain things to sour vibes kept happening.

FOOD/DRINK:
To be honest, I didn't even think about going the bar. I can tell you though, I did maintain a corn soup (at no charge). It even had Geera Pork too, but I didn't touch that. I'm not sure if the Shots came through because I arrived after 1am. But I got things nice.

SERVICE:
Boom... as soon as I reach, they said let him in. I felt important. I love it when I get zero problems doing what I need to do. I definitely want to work with 4 Kings in the future, and I can tell people definitely would continue to go their parties.

COST/VALUE:
Yeah well, it wasn't expensive so people couldn't lose out. Definitely worth the cost.