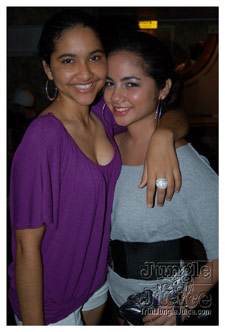 CROWD:
Well TJJ touched down a bit late for this one. We boarded the Ocean Pearl after one in de AM and made our way in. The crowd present tonight looked like the type to hit up the club early o' clock however, so we think we probably missed a few patrons who might have left early. From what we did see, patrons were fashionably dressed and looked like they were here to party and free up. Maybe because exams was over, or the fact that school had officially closed for the Xmas vacation.

VENUE/ACCESSIBILITY:
An easy to find venue with plenty parking. Upon boarding security gave us a good scanning and then allowed us on our way. Now it being a boat the overall ambiance was different especially with the low roof and all. The many support beams made throughout did play a good double role as "stripper poles" to the many showgirls present.

VIBES:
This party definitely had vibes and we reached in the middle of the prize giveaways. The two categories were "largest female wolf pack" for the females and "biggest pimp" for the men. Well if you see how patrons bruck-out for this ... lawd have mercy! Most of dem pictures shud not see the light of day :-)

FOOD/DRINK:
Some of the tag lines were ... free TEQUILA shots, free liquid cocaine shots for the ladies, and free drinks all night long for everyone consisting of Rum, Vodka & Scotch. Not the most premium, but free. Also when yuh head nice and tight, ya cyah go wrong with ah barra and ah channa. So they say so yes ... FREE DOUBLES too. Things did get sticky at the bar in the later half of the party though. All we were seeing was 99 bottles of empty alcohol yes!

SERVICE:
Promoters treated us nicely with access and all and things went generally well. Our only problem was the hiccups at the bar.

COST/VALUE:
Ticket prices ranged from $100 to $180 depending on the time you coped yours. Generally an average price for an event of this nature. Most patrons looked like they were satisfied.