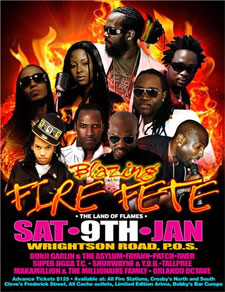 The anticipation is definitely on as tens of thousands prepare for the start of T&T’s carnival season.

At band rooms across the island, artistes and their musicians are rehearsing- preparing for the event they know will kick start their time of year, and certainly the fete lovers’ most anticipated time too!

Former Soca Monarch King, Bunji Garlin, chatting on the first big event to take place for the season said, “Soca is the music of the people and the best cast was chosen to represent the vibe of the people at Fire Fete 2010.”

He added that as far as he was concerned, the cast for Fire was chosen based on each performer’s true ability.

Bunji for one is certainly ready- having held on to the ‘fire man’ title, over the years. With hits this season that range from “No Borrow” to “Gaza or Gully,” and a hit collaboration with wife and band mate- Fay Ann Lyons, entitled, “Call Me,” there’s no denying that Bunji and his crew are a must-see at the annual Fire Fete.

The January 9th, 2010 edition of the event moves from its traditional Wrightson Road abode, to another hot spot further down as The St. John’s Hall will be transformed into “The Land of Flames.”

Already, momentum for Fire Fete is building on the street- even amid preparations for Christmas. On Facebook.com, the group- ‘ Blazing Fire Fete 2010”- has attracted a large number of eager patrons who, over the past week have received inside info on promotions and the cast for the show.

Many are already loving the fact that St. John’s Hall will host Fire Fete 2010- as they know the ambience will prove party friendly. There’s so much more to come but many say and most agree that the first fete, FIRE FETE- cannot be ignored, nor can it be missed!