By Kris-Michael aka Jokey Juice
Published on 16-Dec-09
We must give a great thanks to Vybz Kartel for gracing our shores once again and entertaining us with his music. No doubt he will ...
>> View Vybz Kartel Live!! At The Zen Night Club Gallery 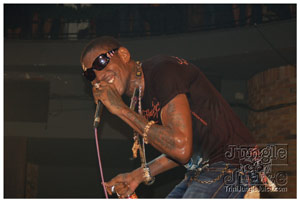 We must give a great thanks to Vybz Kartel for gracing our shores once again and entertaining us with his music. No doubt he will be cooking up some more hits in his kitchen of musical intellect. Also must give huge respect and love to Shal Marshall for giving TJJ lots of love, whether it was taking pictures or just socializing with us that night. Hats off to you both courtesy of Trini Jungle Juice!

CROWD:
The arrival of the newly crowned "King Of The Dancehall" brought out masses of fans to the Zen Nightclub Wednesday night. People arrived via cars, bikes, even buses just to see their favorite Jamaican artiste perform at the venue. Parking became so saturated that patrons began parking around and even inside the newly built School Of The Performing Arts. It is safe to say that Zen was rammed up and over capacity. Inside was simply astonishing to see the sea of people both in the general area as well as VIP area upstairs; who were anxiously awaiting the arrival Vybz Kartel. Patrons stepped out in their best attire; some paying appreciation to their Jamaican roots, while others was hoping to get a "sweet eye" from Kartel while he performed later that night because of their gear. Local celebs also came to show the love to Kartel that night. Shal "S Dot" Marshall, Umba "The Shepherd", Fireball, Jah Bami, Bunji Garlin and his lovely wife Fay-ann were present, just to name a few.

VENUE/ACCESSIBILITY:
Zen Nightclub is known for having its 1st class performances and this one was no exception. Vybz Kartel is one of the most popular Jamaican artists today, and unfortunately some of his lyrical content may be contributing to the world's violence, which might explain the heavy presence of armed forces at the premises, both in and outside the venue. But that didn't stop patrons from enjoying themselves.

VIBES:
The excitement, energy, entertainment and music was on point from both the artist and fans. The crowd went into an uproar as Vybz Kartel hit the stage approximately at 2:00 a.m and entertained the crowd with all of his hits, as well as some new tunes that should have fans scoping the internet for their download links. His performance lasted for roughly a hour and a half where his beats and riddims were provided by DJ Marcus & Xbass. It was an exhilarating performance all in all.

SERVICE:
A great appreciation must be sent out to both members of staff at the venue, as well as, the security from both Zen as well as the police forces, who kept the party safe and under control throughout the whole suarez.