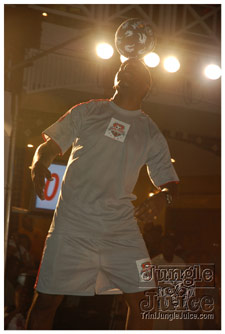 Can you believe the same guy, Kerron Ford, who won the Trinidad and Tobago national qualifier for the last 2 years came back and won it again? To me, the finals was actually competitive although it didn't seem it would have been, as most of the judges decisions were clear cut victories. The judges on hand were Soca Warrior Brent Sancho, Soca artiste Shurwayne Winchester and the San Juan Jabloteh first team head coach, Earl Jean.

CROWD:
Since it was a special event, our focus wasn't on the crowd, but on the talent. But I can tell you, alot of the folks in Movie Towne tuned into the show. Red Bull Street Style is back!

VENUE/ACCESSIBILITY:
Well it's Movie Towne, located in West Port-of-Spain, which is accessible by all and has lots of parking. I don't know how they got the Red Bull van in the Fiesta Plaza, but that's where DJ Dane was throwing down the music. Red Bull put alot of effort in getting the venue event ready, including a big stage with lots of lighting, which had several passerbys curious to know what was going on.

VIBES:
Sorry to say, but basically after the first round, I found the competition got repetitive. It became a matter of consistency than anything. Only when a Streetstyler did a trick for the first time they really stood out.

FOOD/DRINK:
There was no food or drink served at the event, but if you wanted you could have headed over to J Malones or Woodford Cafe to get your fix.

COST/VALUE:
It was free for the general public, who watched our nationals go at it to win some free cases of Red Bull, and more importantly, a trip to South Africa in March 2010, where the best of the best meet for the final showdown.  So in other words, BOOM.... Red Bull gives you wings to go South Africa!

Stay up-to-date with all the interviews, stories, facts and dates for the national qualifying tournaments in other countries by visiting www.redbullstreetstyle.com.