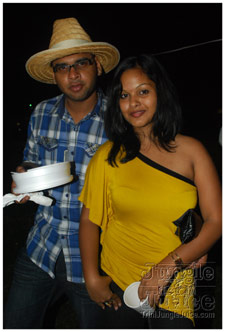 CROWD:
This festival kicked off early ... 7PM. Between that time and ten o' clock however, the place was already more than half full with parang enthusiast. Two hours following that, the venue packed out and we noticed the introduction of a lot more younger patrons. Yup ... the ones that look like they are here for the lime, de drinks and de good vibes. They might hear a parang or two but its not the night's highlight ... lol.

VENUE/ACCESSIBILITY:
The venue was quite spacious and suited most of the event's needs. A main stage was located up front, with bars to the right hand side and several food tents to the back. Patrons' were covered by a star filled sky and the night's cool breezes. Some folks found that it did get a bit chilly however as we saw them clad with sweaters and all. The only problem regarding the venue was the issue of parking for the average patron, as the festival took place on most of parking lot. This could not have been too much of a biggie though as fighting up with the usual hills of Paramin was never an easy feat.

VIBES:
This is almost like the mother of festivals when it comes to sweet parang, so if you came for parang then you were in the right place. There was live performances all night long. For those who just came for the lime, in the earlies things were a bit quiet but later on the action heated up as the crowd grew, the alcohol flowed and the music began to pulsate.

FOOD/DRINK:
Known for its variety and selection of Wild meat, Parang was not the only thing some patrons came out for. Now as with everything else, you hadda get there early if you want to get the good stuff ... so take note. From the little we got to taste though, food seemed to be on point. Getting a drink at the cash bar was a little time consuming however, so if your posse was big then buying a bottle could have sure saved you the hassle of regular trips. If you were a VIP patron you enjoyed a complimentary bar and luckily for us, that courtesy was also extended our way.

SERVICE:
The overall level of service was good, with the night's list of events coming off well. The main aspect of the show was the live performances which all flowed in a smooth and timely manner.

COST/VALUE:
$100 in Trinidad is no money, so to pay an admission fee of that price and get the music, lime and live performances ... ya cah go wrong. Definitely a good price!