By D1 Jam Masters
Published on 12-Dec-09
First off, much respect to Brian and Saira for the concept and hard work. Personally I am proud to see soca music getting exposure in Holland, and so much that people traveling from other countries to come party with us. Nuff love to all my Germans who always give me their support. This was a good learning ...
>> View Caribbean Soca Glow Fete Gallery 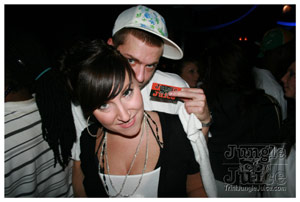 First off, much respect to Brian and Saira for the concept and hard work. Personally I am proud to see soca music getting exposure in Holland, insomuch that people traveling from other countries to come party with us. Nuff love to all my Germans who always give me their support. This was a good learning curve for us all and hopefully next time the little rough patches would be ironed out. Big up all the dj's and artists for coming through and representing. Special shout out to Godfather Sound, DJ Spice, DJ Sky, DJ Lennox and Germany's Soca Ambassadors, Soca Twins. Large up Flagz crew, Mac Bigtruck Looby and the whole UK Crew. Nuff love to Tate for holding down the camera!!

CROWD:
Well TJJ roll up in the dance and we live cause my Jam Masters crew also spinnin tonight, so we VIP! Only problem there was no VIP section. On a first quick glance, the crowd was very obedient to the dress code policy. Except for the few ladies who came wearing black, most people understood that GLOW meant come in white and came dressed as such. The Flagz crew from UK came out in all their glory, Wukkup Terrorists from Germany, Soca Revolution from Sweden. Europe, the Islands, a complete international community together in Amsterdam for soca. WOW! Nice thing was everybody came with their flags representing. I even saw a flag from Morocco! Crazy shit!

VENUE/ACCESSIBILITY:
The venue was a stone's throw away from the central station and a big car park was also close by. The place didn't "wow" you on entering and was pretty much a basic club. Clean, not too small and even though some people was bawlin "oh gosh it hot ehhh" I personally had no problem with the temperature. After-all, a soca party should be hot right? No pun intended.

VIBES:
People came to this party expecting mad vibes and this anticipation helped to build a nice atmosphere from early. The party built steadily but then some live performances came in just when the party was peaking and from then on it was all down hill. Live performances on bad equipment is a potion for disaster if u ask me. Galloway tried his best to keep the vibe with some nice tunes but it seemed that Daddy Slim had a more difficult time to catch and hold ah vibe. I don't think I heard an original tune from this dude. Only cover after cover. But don't watch nothing artists, I blame it on the equipment and the engineer who was A.W.O.L just before the performances were about to start. The dj's tried there best to re-kindle the flame that had the party rockin hard, but that ship had already sailed. Still, the real soca lovers managed to hold onto what was left and still shake a leg and grab a dagger here and there.

FOOD/DRINK:
Well I didn't taste any food cause by the time I checked for the johnny cake (fried bake) and chicken leg, everything was finished. But I heard from some people that it was finger lickin' great! Big up to the promoters for not saving me none! The bar was stocked with alcohol and they were situated on the top shelf, and that is all i have to say about that. But the bar girls were cute and very helpful even if the beer they were serving was a little cooler than room temperature.

SERVICE:
Big up the promoters for trying a thing and supporting soca! The bouncers getting flush because they were very unprofessional, very fassy-like! Literally "man-handling" young ladies nah make it no way no how! Promoters, please keep an eye on how your paying patrons are treated and please take their complaints seriously. Ok then! Big up the bar girls AGAIN!

COST/VALUE:
Well the general comments I heard were those of satisfaction mixed with a hint of disappointment. Other people complained about the sound quality being too bad, poor performances, the party ending too early but the johnny cake and chicken leg were off the chains. So all in all it was a typical party night because no matter what, you gonna always have some people satisfied and some who just bitch for no reason.