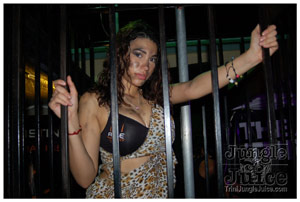 The party was advertised on facebook to finish at 4 but it finished at 3, which was rel bummy, but the executive for signature events (Nicholas Lee) apologized on the cooler parang page.

CROWD:
The crowd was a little shaky at first since it was difficult to get in but the entire yard was full of beautiful partygoers by 1 o' clock. Everyone was well dressed and in full Christmas cheer with Santa hats and red and green outfits.

VENUE/ACCESSIBILITY:
The yard was really clean and easy to locate but parking was a bit of a problem for those who came after midnight. There was enough room in the yard for people to set up their cooler and lime around it without disturbing others.

VIBES:
The real party did not start until midnight since people were still trying to get in. From midnight, everyone was dancing and having a great time. The music was good, but contrary to everyone's expectations, there was only about 3 parang songs.

FOOD/DRINK:
Well, it was a cooler fete so I don't think anyone bought drinks. They said it was food inclusive but I didn't see much food tents, or anyone eating as a matter of fact, so I'm guessing that the "Food Inclusive" thing was a bust.

SERVICE:
The entry system was a complete bust. There should have been more people at the gates. They spent long searching coolers for glass, yet there were people inside with glass bottles anyway.