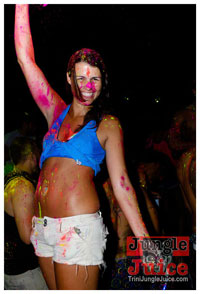 "Dis One Goin And Fog Up De Place!"

However it was neither fog nor powder but it was ABIR colourful powder that was being thrown in the air!  What are we talking about?  The perfect Cooler, Breakfast, Wet Fete of ALL time... SOAKA!

So how can one make such an epic event? Well according to the TJJ Party Mixer’s Guide you add a dash of Kes, a slice of Bunji and some special Machel essence.  Allow coolers in all night long.  Shake, pour and serve over some thousands of gallons of water from water cannons starting at 3am in the morning and you get SOAKA!

wOw Events have perfected this cocktail this third time around for Soaka C2K13 edition.  The setting for this perfect storm at O2 Park included large Coors Light beach balls to play with, inflatable pools for the Soaka Aqua Babies to wade in, and super soaker water guns courtesy Island Hobbies for the lucky few.  And just like the past two years you were given complementary Ziplock Bags as you entered for your cell phone and Francis Fashions T-shirts to change into when you were ready to leave.  But it was what happened in the middle is what made the event so epic. 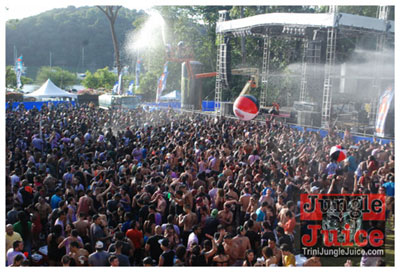 From the word go DJ Dane and Hollywood Sachy had the crowd pumping with anticipation with upcoming performances from three of the biggest Soca stars on the planet plus the filming of the official video (see "The Fog" official music video) for a song simply known as “The Fog!” 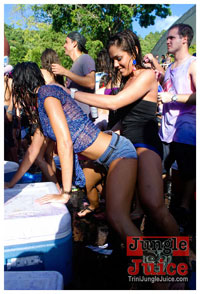 Up first was Kes who mellowed the crowd with his “Tuesday on the Rocks.”  Next it was time to Fog Up De Place as Machel came out hard with his Powder Posse infused performance!  And finally as the sun began to rise it was time to Bunji who again did not disappoint as he began to free style before starting to sing his mega hit “Differentology” and then to his amazement he was forced to stop singing as the crowd took over vocals singing the song word for word!!!

The usual sponsors were also in attendance with free Cooler Light, Freeze Smoothies and Pepsi flowing from every corner.  But special mention must be made to the most important sponsor of them all Junior Sammy!  With six large Junior Sammy water trucks there was not a dry area anywhere!!!

At the end of it all one may think that it Phagwa took place at O2 Park, but it was the epic fete of C2K13 SOAKA! And after a night like that all you can say is wOw!