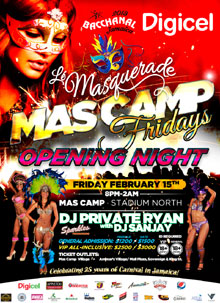 (Kingston, Jamaica – February 11, 2013) – Bacchanal Jamaica will join the Caribbean’s celebration of soca on February 15 with the first in its series of new and improved Friday fetes for the 2013 season, Bacchanal Fridays. The 2013-themed “Le Masquerade” season will re-engage soca junkies with this disco-styled fete to get revellers warmed up for the season’s exciting offerings in celebration of Bacchanal Jamaica’s 25th anniversary.

Socaphiles new and old will be treated to a pulsating mix of the deejaying styles of DJ Private Ryan from Trinidad and Jamaica’s own DJ Sanjay from local radio station and 2013 sponsor, FAME 95 FM. DJ Private Ryan will be coming in fresh from Trinidad Carnival and is best known for his unique soca mixes that always gets his crowds in a frenzy. The accomplished DJ is also a top personality on Trinidad’s urban radio station, RED96.7 FM. DJ Sanjay is no stranger to the Jamaican party scene or the turntables and is known for his powerful ‘crowd hype’ voice and love for the soca genre. He plans to unleash an unforgettable mix of the hottest and latest soca hits for this opening night fete.

Patrons wishing to get on bad at this party can do so for $1,200 presold and $1,500 at the gate for general admission. The VIP experience can be enjoyed for $2,500 presold and $3,000 at the gate, food and drink inclusive. Tickets for the “Le Masquerade” opening night fete go on sale as at Monday February 11 and are available for purchase at all Ammar’s stores and at the Mas Camp only. VIP season passes for Bacchanal Fridays fetes will go on sale at the same time for $12,000; these can only be purchased at the Mas Camp. “Le Masquerade” sponsor Smirnoff is also offering limited VIP season passes for the same price and provides holders with access to the all-inclusive VIP area and to Smirnoff’s booth. These special season passes also offer a 10% discount on Smirnoff’s Road March costume, Cirque du Minuit.

For the new season, fans can expect improvements to the venue including expanded VIP bathrooms and a paved, dust-free surface. Also, there are new entry requirements to ensure safe and responsible drinking at all fetes. At each party, patrons will be asked to show identification prior to entry. Persons 18 years and older will be given armbands which will indicate their eligibility to purchase and consume liquor sold at the pay-bars. Patrons under 18 will be granted entry to the fete but without armbands. “We at Bacchanal Jamaica encourage all soca fans young and young at heart to enjoy our parties. We also strongly believe in all our supporters having a good time and most importantly, drinking responsibly, as we ensure that our events remain safe and fun-filled events”, stated Renee Hartley, Public Relations Officer for Bacchanal Jamaica.

Costumes for the April 7 Road March can be viewed and purchased at the Mas Camp or online at www.bacchanaljamaica.com. Opening hours for the Mas Camp are Mondays to Fridays, 10 a.m. – 7 p.m. and Saturdays 12 noon to 4 p.m. The Camp is closed on Sundays and will also be closed on Ash Wednesday.