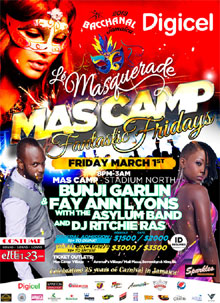 (Kingston, Jamaica – February 27, 2013) – Digicel’s Bacchanal Fridays will stage its first band performance this Friday March 1 with a highly anticipated mega-performance from two of Trinidad’s finest. The powerhouse duo of Bunji Garlin and Fay-Ann Lyons will be live inside Mas Camp ready to “wuk up” Friday’s party crowd. The pair will be backed by the popular Asylum Band.

Ian Alvarez, stage name Bunji Garlin, has been touted as arguably the top lyricist in his genre, bending and weaving his words into interesting images and stories that soca fans of all ages can relate to and enjoy. With his 2013 mega-hit “Differentology” riding high on the airwaves, Bunji Garlin is sure to have patrons singing along to his every hit. A highly accomplished artiste, Bunji Garlin invaded the soca arena with his deep, commanding voice in 1999 and has consistently produced some of soca music’s greatest staples including “So & So”, “Irregular”, “Banana” and “Born Ready”. During his 14-year career, he has released nine albums, including this year’s “The Viking” and has won Trinidad’s International Soca Monarch title four times. A multi-time performer at Bacchanal Jamaica events with collaborations and performances with top Caribbean and international artistes under his belt, Mr. “Differentology” is ready to ignite this week’s fete with an unforgettable, top class show.

Bunji Garlin’s other half and soca royalty, Fay-Ann Lyons, will join him on stage as a star in her own right. With hits such as “Heavy T Bumpa”, “Miss Behave”, “Meet SuperBlue” and “Display”, this saucy singer writes her own lyrics and composes her own melodies. Also known as ’Lyon Empress’ and ‘Silver Surfer’, Lyons was the first woman to win the title of International Soca Monarch in 2009, while also copping the award for Groovy Soca Monarch winner in that same year. Music resides in the blood of this daughter of the 2013 Soca Monarch winner and veteran soca artiste, Super Blue, solidifying her destiny to be a bonafide soca star, loved by all her fans worldwide.

Soca lovers of the husband and wife team can get “ready” to “drop on di ground and roll” for $1,500 presold and $2,000 at the gate for general admission. The cosy, exclusive VIP area, which includes food and drink, can be accessed by patrons 18 years and older for $3,000 presold and $3,500 at the gate. Tickets are available for purchase at Mas Camp and Ammar’s only. Socaphiles can also expect special surprises and treats from Appleton, sponsors of this highly-anticipated band night. Bacchanal Jamaica’s title sponsor Digicel and other sponsors including Smirnoff, Pure Country and Pepsi Music will also add their special touch to the night, guaranteeing a mega-tastic night of soca, fun, food and non-stop entertainment.

The Le Masquerade season continues to bring the best of soca to Jamaica with talented female deejay Duchess Alicia set to spin the Bacchanal Fridays’ turntables on March 8. Le Masquerade costumes are also still available for sale at Mas Camp or online at www.bacchanaljamaica.com.