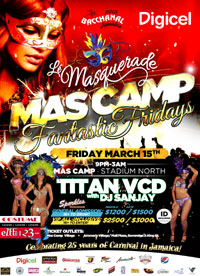 (Kingston, Jamaica – March 13, 2013) – 9:00 p.m. will be the adjusted start time for this Friday’s weekly Digicel Fantastic Fridays fete held at Mas Camp, Stadium North. This is due to the staging of the 2013 ISSA Boys and Girls Athletic Championships being hosted next door at the National Stadium. The fete will also have a later end time of 3:00 a.m. to accommodate this change.

This week’s fete will welcome one half of Trinidad’s deejay twin team, Kenwin Gardiner, from the popular group “Titan ‘The Art of Entertainment’ Vibes Cyah Done”, or more simply, Titan VCD. Having developed his craft alongside his twin brother since their teenage years, the vibes-filled, diverse master juggler has become one of the Caribbean’s most sought after musical mixers and has shared his unique bending and twisting of the rhythms and beats of any genre with fans in Barbados, St. Lucia, Miami, New York and the Cayman Islands. And no matter the audience, whether young or young at heart, this titanic personality always delivers unmatched pleasure for the listener. And his talents do not end there. Titan VCD has established themselves as more than deejays, creating and hosting noted party series in their native homeland including The REAL Deal, The Titan Private Party and THE 1 (The $1 Drinks Party). Hailing from Trincity, Titan VCD is also the official deejay for Machel Montano’s HD artistes Patrice Roberts and Farmer Nappy, set to perform at this year’s Bacchanal Beach J’ouvert event. No stranger to the Jamaican soca crowd, the “Vibes Cyah Done” crew promises an unforgettable fete and shared, "Deejaying isn't just about playing music. It's about pleasing people before, during and after a show and more importantly, you're only as good as your last performance so we always go hard." The Trini turntable tornado will be joined by DJ Sanjay, afternoon personality on local hip radio station, FAME 95FM, who is also a sponsor of this year’s Le Masquerade season.

The night’s event is sponsored by Jamaica Observer who is celebrating their 20th anniversary, and has promised to bring something extraordinary to masqueraders attending the final staging of this season’s Fantastic Fridays. Patrons can join the party for $1,200 presold and $1,500 at the gate for access to general admission, with food and drink on sale. VIP all-inclusive tickets are available for $2,500 presold and $3,000 at the gate. All tickets are available at Mas Camp and all locations of Ammar’s.

Bacchanal Jamaica adds a new dimension to this year’s Le Masquerade season with a solo staging of Bacchanal Saturday on March 23, sponsored by Digicel. This fete invites all “Wotless” socaphiles to “Stress Away” with Trinidad’s 2012 International Soca Monarch Winner (Groovy), Kes the Band. The following Saturday, March 30, Bacchanal Jamaica heads to James Bond Beach in St. Mary for the always colourful paint party, Beach J’ouvert with live performances from Shurwayne Winchester, Patrice Roberts and Farmer Nappy. Wednesday April 3, Le Masquerade moves back to Kingston for Soca @ de Sandbar and the all-night ‘dutty mas’ road party, Bacchanal Jouvert on April 5 with Destra Garcia. Ending the season on a high note, twelve costume sections will take to the streets of Kingston on Sunday April 7 for the spectacular Le Masquerade Road March.