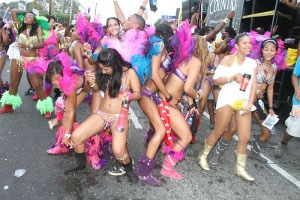 (Kingston, Jamaica–April 8, 2013) – As the sun began pelting down on a beautiful and bright Sunday morning, thousands of colourfully-clad masqueraders took to the streets of Kingston yesterday for the finale of what is being called the best bacchanal season yet. Bacchanal Jamaica’s 25th anniversary season, themed “Le Masquerade” came to a close with its Road March and costume display that wound its way from the home of bacchanal as far as West Kings House Road and back to the new home it has occupied for two years.

Shortly after 10:00 a.m., revelers outfitted in ‘pretty mas’ costumes with intricate make-up and body painting designs, jewels, studs and glitter, began the road march spectacular that would continue well into the evening. Men and women in costumes sponsored by Digicel, Pure Country, Appleton, Ammar’s, Smirnoff, Jamaica Observer and FAME 95FM, ‘chipped’ on the road to music from the various music trucks featuring some of Jamaica’s and Trinidad’s top disc jocks including The Dynamic Dragons, DJ Richie Ras, DJ Kurt Riley, DJ Smoke, DJ Private Ryan, DJ Duchess Alicia, DJ Arif Cooper and DJ Myles. Adding to the excitement and the energy of the day was the participation of local and Trinidadian performers who ‘jumped’ alongside revelers and gave rousing mini-performances of their hits throughout the day. Destra Garcia, Shurwayne Winchester, Super Jigga TC, Beenie Man, Flippa Mafia and Machel Montano could be seen having a grand time with their fans as many onlookers strained to capture their favourites on camera. Other celebrities spotted including Usain Bolt, Yendi Phillips, Kadine ‘Ms. Kitty’ Hylton and Tifa.

And it was not only revelers who ‘palanced’ and gyrated to the soca beats; many onlookers crowded the route to catch a glimpse of the excitement as truck after truck passed blazing the best of soca, then and now. The longer Road March route travelled past many residential and commercial districts including New Kingston, Trafalgar Road, Hope Road and Constant Spring Road, providing an opportunity for many to participate, if only briefly, in the Le Masquerade action. The young and young at heart caught the fever and provided much eye candy as they seemingly competed for attention with their dancing displays. And as the parade drew closer and closer to Mas Camp, many could be heard reminiscing on past events, wishing for more roads to travel and making plans for the 2014 season. Masquerader Zuri Johnson who wore the Frenchmen t-shirt costume shared, “This was my first time on the road and I have no regrets. I absolutely had the best time, the vibe was right, the music was at its finest. What more could I ask for? I have no complaints except that my feet hurt but well worth it, and I am looking forward to next year.”