RESERVEDnyc - Chefs of the Caribbean 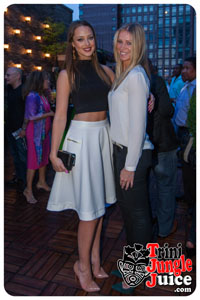 Celebrities, politicians, musicians, business executives, fashionistas and many more were all drawn together last Thursday to a beautiful Fifth Avenue loft and penthouse in New York City to experience RESERVEDnyc - Chefs of the Caribbean. Only the third installment of the OCEAN Style culinary series (and second in New York), RESERVEDnyc brought together an interesting mix of Caribbean and non-Caribbean people living in the NYC area albeit with a shared interest in the culinary arts.

Reggae superstar Maxi Priest was one of the notables on hand and had this to say about the event "It's always inspiring to see Caribbean innovation. I was so impressed by the concept, the food, venue and turnout. I am Blessed to travel the world and attend many different types of events, but I love when I see people promoting the Caribbean and its talented individuals in a big way on a global level. I met some really interesting and progressive people, and thoroughly enjoyed the evening. Clearly, from the support of the guests many people felt the same way. Congratulations to OCEAN Style and Douglas Gordon for taking a good idea, and making it a reality."

Brooklyn Borough President Eric Adams was also in attendance and remarked "It was a marvelous time had by all at the Chef's Of The Caribbean event held in NYC. The borough of Brooklyn with its rich diversity eagerly awaits Douglas Gordon and OCEAN Style's next wonderful affair."

Without question the true stars of the night were four highly accomplished chefs in the form of Chef Purmessur of Coconut Bay Resort in St. Lucia, Chef Tim Tibbitts of Flying Fish Restaurant in Freeport, Bahamas and New York based chefs Sean John of Spurtree Restaurant and Shorne Benjamin of ShorneCulinaire.

"We held the event to showcase Caribbean culinary talent and provide an enjoyable and entertaining evening and in the process support two great causes - the American Friends of Jamaica (AFJ) and the Caribbean Tourism Organization's Scholarship Foundation" stated OCEAN Style Editor Douglas Gordon. 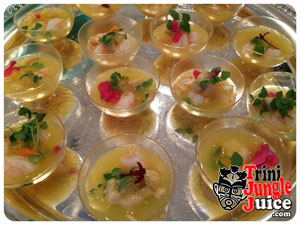 The event was supported by Delta Air Lines, Vikram Chatwal Hotels, Iberostar Resorts, Caribbean Tourism Organization, American Friends of Jamaica, Institue of Culinary Education, Coconut Bay Resort and WIN Caribbean. Guests were treated to live entertainment first during cocktails by the very talented St. Lucian saxophonist Robert "Zi" Taylor and then at dinner by the band led by vocalists Ricardo St. Von and Fay Ola with Thierry Remion, Howard Britz and Daniel Gould making up the rest of the band.

OCEAN Style will continue their fundraising efforts online for three (3) weeks online via a "super raffle" that will benefit the AFJ. The value of the seven prizes available exceed JAD$1.8M and include a 4 day / 3 night luxury weekend at Iberostar, a custom designer gown by Femheka by Raxann Chin, a personal stylist makeover and US$1000 shopping spree with Phillip Bloch, a personal studio tour and wrap show experience on the set of Basketball Wives LA with John Salley, a weekend getaway to The Spa Retreat in Negril, a Chloe 'Bridget' handbag and dinner for 6 at Miss Lily's. For more information or to enter: www.myoceanstyle.com/raffle