By TJJ Admin
Published on 30-Nov-14
Swanky International, the premiere Mas Band of Cayman Carnival and 7-time Band of The Year, launched their 2015 Costumes on Saturday, 29th November, 2014. It was a historic occasion as no Band has ever launched in the history of this up-and-coming Carnival. The magnitude of the Launch was ...
>> View Swanky International 2015 Band Launch 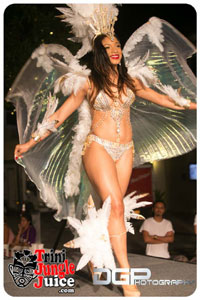 Swanky International, the premiere Mas Band of Cayman Carnival and 7-time Band of The Year, launched their 2015 Costumes on Saturday, 29th November, 2014. It was a historic occasion as no Band has ever launched in the history of this up-and-coming Carnival. The magnitude of the Launch was at the level of what is expected of Trinidad Carnival major Bands, the location, Camana Bay, is the crème de la crème of locations in Cayman and the production by Cayman’s premiere Event Production company, AI Rentals, was over the top for what people have seen for launches in the Cayman Islands.

The event was hosted by West Indies Wine Co. and an estimated 1600 people were in attendance at the peak of the Launch Event. The night started off with a fantastic fashion show of two of Camana Bay’s top retailers, nky with their elegant and classy clothing lines, and Sand Angels rocking the sexiest swimwear you can get on island... THEN the party got started!! The Swanky Sexiness models took the stage and took the breath away from those in attendance. It was time to show the world what Swanky had in store for Cayman Carnival 2015 with Blue Sky Airlines presenting “Kaleidoscope... Out of Many Colours”. The costumes were amazing and the models presented them with all the glitz and glamour. 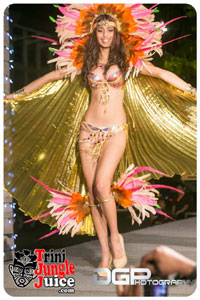 Swanky’s owner, Craig “Festa” Frederick, said, “It’s a dream come through, to be at such an amazing location like Camana Bay and showcasing the most awesome costumes Cayman’s Roads have ever seen! I’m filled with pride and can only imagine how amazing the experience will be come next May. We have grown from only 57 masqueraders in 2007 to over 850 last Carnival, and shooting for over 1200 this upcoming Carnival. I couldn’t have achieved this without my amazing committee of Wayne Kirkconnell, Danielle Japal, Rory Mohammed, Cecil Roberts, Howard Pandohie, and the future of Swanky, my niece Tatiana Ramoon. Also, a big thank you to our sponsors, Blue Sky Airlines, West Indies Wine Co., Absolut, Blackbeard’s Rum (the distillers of Swanky Rum!), Camana Bay, Automotive Art, Impressions Beauty Salon, AI Rentals, Red Bull, Lacovia Condos, the official radio stations of Swanky, VIBE FM and SPIN FM, and all others for making this event a smashing success.”

Swanky is now embarking on a feat that never has before been even dreamt of for Cayman Carnival, and that is to put over 1200 masqueraders on the Road for Cayman Carnival 2015. May 2nd will be a sight to see as Swanky masqueraders come chippin down the Road with the two biggest sound trucks Cayman has ever seen. Swanky and TJJ invites you to come and enjoy this hidden Carnival jewel in a safe, clean and friendly environment. There will be packages available soon though Swanky International’s website, www.swanky.ky, and priced at prices that you would not think would be possible for a trip to the Cayman Islands. This is definitely a Carnival to take in and to be honest with you, once you experience it, you will want more!

Trini Jungle Juice will be there and so should YOU!!  SWANNNKY!!!

For more on Cayman Carnival, be sure to visit http://www.trinijunglejuice.com/carnival-cayman.html