The Hills 'Premium All Inclusive' Review 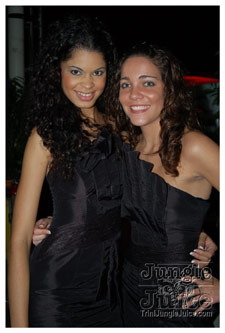 After a successful advertising campaign depicting local versions of Lauren and Heidi from Mtv’s secretly addictive The Hills reality tv show, there was the even more successful inaugural 2008 edition of The Hills Party! The 2008 event was simply perfect with the right people and premium service that represents the opulence of what Mtv’s hit show the Hills was all about.  But Joe still remembered that the event is The Hills Trini Style as he even had a Las Lap Truck featuring a performance by Iwer George!  Aight, nuff standard English! Here’s de 2009 low down on De Hills!

At first yuh boy was a bit concerned dat come 2009 every Tom, Dick and Harry would make their way to Cruise Inn for dis instalment.  And yuh know when a nice ting get TOO big then de lime does get out of hand.  But surprisingly crowd control was de name of the game, as Joe knew exactly how many people could be catered at this site and did not go over board!  De crowd was big but manageable as you could have easily moved through it.  But before we get into all of dat, yuh have to start at the beginning of what the experience De Hills is all about...

The Cruise Inn compound has always been a great location for any event.  With its many levels with private rooms, five star restaurant, built-in amphitheatre and lounging decks overlooking the many yachts floating on the moonlit sea, Cruise Inn was transformed into rolling hills as the crowd swayed to the beat of Less Than Zero.

Unlike other events it was a cool scene in all respects ...  to get in was no hassle as even though security was present they were not overbearing!  There was a red carpet and paparazzi to greet you (but yuh know we at Trini Jungle Juice doh harass yuh to take yuh pic, we does nicely ask yuh first)!! And there were FREE premium drinks and cocktails everywhere and even food too, well at least free food in VIP (big up to Nick Gyros)!!!

As I began to wonder if dis fete could not get any better it did as my ladies all got the memo to represent as they all looked their best decked off in their Christmas gear.  Meh bredrins also got de memo dat de Breathalizer was in full effect from which many of them voiced their concern that even with only one drink they could get charge for dat TT$8,000 offence.  And with Chaguaramas having only one way in and one way out, they were sure dat de police would make their presence felt and take man down.  But I tried to reassure my people not to worry as dey had too much Government Ministers in de fete for de police to take advantage of anybody (but do remember kids ... doh drink and drive)!

As you moved through the venue, you got little surprises tucked away in different locations ... An ice-cream bar, creamy cocktail bar, and even personalised give-aways in the form of a lighter with you name engraved in it with every purchase of cigarettes (and yuh know dat we living in serious times when de DunHill girls checking yuh Id first before dey sell yuh ah pack)!

De only issue I and most patrons had with this event was dat it ended TOO early!  3:30am??!! De vibe was now settling in! To formally end things off, there was  a fireworks display, and then de music stopped.  Well big up to ALL de Brand Managers for their creative promo booths and big up to Joe for making De Hills 2009 just as good as 2008!

1 Response to "The Hills 'Premium All Inclusive' Review"