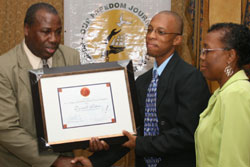 Kingston, JAMAICA (August 29, 2008) The media was out in full force at The University of the West Indies, Mona, to cover the August 25th Awards Ceremony of the Inaugural Eric Williams ‘School Bags’ Essay Competition.

The event was hosted by the High Commissioner of Trinidad and Tobago to Jamaica, Hon. Yvonne Gittens-Joseph, and the Vice Chancellor of The University of the West Indies, Professor E. Nigel Harris.

Co-sponsored by the Eric Williams Memorial Collection (EWMC) and the Jamaica National Bicentenary Committee, the contest was open to all final-year Sixth Formers in 155 schools, 17 Caribbean countries.  First prize winner, among several entries from Trinidad and Tobago, is Dexnell Peters of Trinity College.  Topping the Jamaican compositions are Wolmer’s School second and third place recipients respectively – Patrina Pink and Machela Osagboro.  Submissions were also received from Dominica and Grenada.

This regional effort, honouring the 2007 Bicentenary of the British Abolition of the Transatlantic Trade in Africans, focused on Eric Williams’ enduring book, which “defined the study of Caribbean history”, and established him as a major historian of the 20th Century. 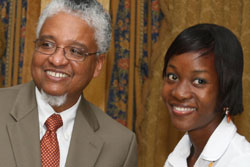 The reviewers were pleased with the quality of research, writing, and the manner in which the students addressed the topic:  How has Capitalism and Slavery shaped current debates on the commerce in African slaves and the abolition of slavery? What relevance, if any, do these debates have for today’s student? They were curious as to whether the essays would, as Prof. Shepherd queried in her overview of the competition, “reflect the old imperial absolutisms, mimicking the Wilberforce mania in the UK during the Bicentennial, or truly reflect Eric Williams’ revisionist views?”  They need not have worried.  As Dexnell Peters stressed: “None can question the success of this book... [It] can be considered the starting point to the eventual liberation of the Caribbean from its imperial shackles...”  Patrina Pink was equally clear: “Few works have ruffled the shirtsleeves of academia more than Dr. Eric Williams’.”  And in addressing the 64-year-old book’s relevance to today, Machela Osagboro conducted a survey of her classmates, 73% of whom agreed that current debates raised by its theories were still pertinent.

The judges especially mentioned Campion College, Jamaica’s Xavier Campbell.  In an engaging paper, he expressed his shock at the link between slavery and the industrial revolution, writing:  “It is troubling to me that this book was published so long ago and yet it has not changed the way that the Industrial Revolution is being taught in the Caribbean…My question is, and it bothers me every day since I discovered it:  Did Africans have to suffer for Europeans to prosper?” 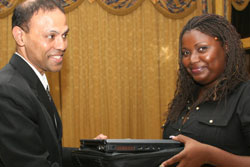 Prizes include: a four-day trip for two to Jamaica with airfare, hotel accommodations and two meals daily; a laptop computer; various tours; US $1,500; courtesy calls on the President of Trinidad and Tobago and the Speaker of the House of Representatives; Eric Williams’ books; and a framed certificate.  The Miami Herald’s online edition, CARICOM’s and UWI’s (three campus) newsletters will publish the winning essay.

Scholar-statesman Eric Williams led the Government of Trinidad and Tobago for a quarter century until his death in 1981. Paying particular emphasis to learning, “to educate is to emancipate”, on August 30, 1962, the eve of his country’s Independence from Britain, he exhorted: “You, the children, yours is the great responsibility to educate your parents…you carry the future of Trinidad and Tobago in your school bags.”

He would have been immensely proud of the intellectual calibre displayed in this contest that bears his name, which bodes exceedingly well for the region’s future.

The Eric Williams Memorial Collection at The University of the West Indies in Trinidad and Tobago comprises the Library, Archives and Museum of Eric Williams. It was inaugurated by former US Secretary of State Colin Powell in 1998, and named to UNECSO’s prestigious Memory of the World Register in 1999.