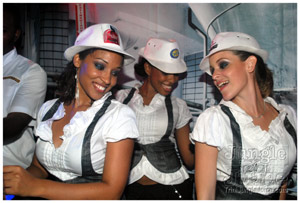 Is it really the ONE?
One of the BIGGEST fetes for the carnival season is ONE fete. YES you heard me, but this year a lot of people had their doubts seeing that there was NO Machel Montano and his HD Band. But the party must go on! On Saturday 16th January at the Queen's Park Oval, your girl and the rest of the Trini Jungle Juice/TJJ TV family was in full swing at this event. Having to cover multiple events on the day, I decided to get there early to scope out the venue and locate everything (in order to fully report to our beloved viewers). As you entered the newly transformed Oval, which is our party zone, we were by greeted by security making sure people had their tickets and doing their routine security checks for patrons safety. So great job by the security and staff on entry. As we entered, rays of lights shining so bright from a man-built waterfall was the first thing that stood out. Oh how wonderful just to feel relaxed as you hear sweet Soca music and smell the tasty food ... uhhhhhhhhhhmmmmmm, good!

Off to the food section... 7pm and the lines where packed. People left home with their bellies in their hands. I could tell because I did the same thing... lol. There was a Chinese food section - from pows to noodles, wantons to fry rice, and of course, Trini Chinese style chicken!  Arabian food section - Gyro people ... gosh the lamb was the best! East Indian section - Doubles, alloo pies, curry chicken! Dessert section - everything was sweet (just like me) ... from chocolate to marshmallows, mini éclairs to apple crepes ... gosh just pure sweetness in that area. Even a Soup section!  Sea food chowder, Corn soup, Pumpkin soup and so much more. Yes people, it was delicious!  Did someone say "Suckling Pig"?  Unfortunately, I could not taste everything, but people were enjoying every last bit of it. While I was doing my eating, I also mingled and asked patrons how the food tasted and I got all thumbs up. So we're giving the caterers a job well done. Food being good in a party is always a big plus!

So while mingling, the big Chutney band DIL-E-NADAN with lead vocalists Derrick Seales, Raymond Ramnarine and Candy Hoyte took the stage. They performed all their hits along with other hot blazing Soca for the 2k10. I danced a bit to the music, but I still needed to see what else the fete had to offer. So now I'm on a platform and it's drinks galore!! From various types of champagne, a fully stock bar with all the premium drinks, Gatorade area... all the different types so you get your energy, Goldschlager, even COLD STONE ice cream ... this platform was well decorated in red and white. It was the lil' mingle and chat area for the non-jumpers ... lol. Along side this was the Fiji water tent where you could rest and sober up, a cool zone, which was wonderful for the ladies in heels. North to South, East to West bars were put in place.

KES THE BAND is on Nadia Batson and Kees himself. At this point, I'm in front the stage jumping and gaping at sexy Kees. And people, did you notice how much weight Nadia lost??!! Hats off to her ... she looks great! Please share the magic nah girl!! ;-) Party-goers now had a lil' alco in their systems ... so wildness, fun and excitement time start! High energy dancers, flips, turns ... you name it, they did it ... left you in a daze for a moment. Then "PALANCE"!! Yes JW and Blaze took the stage and they didn't even sing a note yet and the place was already flattened!! People went mad ... from tanties to the young fellas with their tight jeans was wining down low and running from left to right!! Hype ... talk bout hype! Then Shal Marshall & Screws hit the stage. "POLICE" ... oh yes, women teased the officers for so! Talk bout nice people in the fete ... so Shal & Screws mash up the session too! And we're happy to report that nobody was arrested ... it was too much fun!

HMMMMMMMM boy ... after all that hype and fun it was time to freshen up.. bathroom break.. lol. KES THE BAND left patrons sweaty ... wow, we had a serious gym session. I can only speak about the female restrooms, but it was clean like you could of eaten from the floor! Ladies where cleaning them as you come out. Ladies turning on the pipe for me to wash my hands, napkin handed to me to dry my hands, cream too! Well yes... and a mint or even mouth wash! When last to went a fete and you get all of that in the restroom??!!  Now I have exited the ladies room and I'm ready for a new drink and just waiting on the next band to perform. So who did we spot in the fete? We saw local fashion designer Peter Elias, Miss T&T Universe 2008 Anya Ayoung-Chee, DJ/Artiste 5 Star Akil, Soca star Shurwayne Winchester, ex-Minister Howard Chin Lee, former West Indian cricketer Mervyn Dillion and many more.

Lights, Camera, Action .... not long after a quick performance by Vincy's Skinny Fabulous, Fay-Ann and Bunji Garlin with THE ASYLUM BAND is on. So now the venue is packed and I can't "palance" as much like I did before, but I made sure I was close to enjoy the excitement.  Fay-Ann come ONE fete to mash up ... she just had a baby last year and it didn't even seem so. Lots of jumpin' and wavin'. She is a boss! Even her daddy, Super Blue, made an appearance (it seems like he's touring with the band for the season), to show the youth that CALYPSO still very much alive! Tallpree and Patch performed alongside the band as guest artists. This "Pipe" song will never die ... if you see how man getting on .... only pipe they wanna sell! But ladies, I hope you know the reply?? We bending pipe ... lol.. Now Bunji started to freestyle and do his thing, but he let his wife steal the show when she split the crowd into Band A and Band B to see which side would mash up. Well you know I was on the side that won .... Band B!! We jump, wave and scream .... voice gone, fuss it was just pure vibes and fun!

As in past years, to complete the the fete, the Riddim Section got rolling as as party-goers made their way to the exit. And your friend, Arrive Alive, was there to make sure that we all were sober. Breathalyzer people were in the fete!! Yes people, better to be safe that lose your life because of alcho.  The fete was great nice vibes, good food, nice people ... yes, the season is now warming up, but we can't wait for next year's ONE fete!
Your Party Diva, Desha