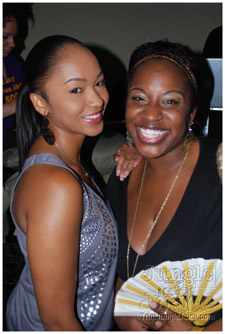 During the holiday season, there's no better was to show your token of appreciation for the less fortunate than donating what we ALL need in our lives most.... FOOD! It's always nice to see the soca community get together and have a good time but it's surely heart-warming to see those same people give back to the community and those in need. Last year, fete-go'ers kindly donated 200 lbs of food and this year they went 900 lbs strooooonnng!!!!!!! Thank you! Thank you! Thank you! All food items collected were donated to the Daily Bread Food Bank.  Dr. Jay and the KOS family couldn't have done it without you!

"No one has ever become poor by giving." - Anne Frank

CROWD:
The line-up at the door of Tropical Sunset was around de corner and by de back... lawd gees! If ah only tell yuh how many people there yuh was yuh wuda tink ah lie ... lol! Everyone had bags filled with non-perishable items and bright smiles that filled the air.... it's a great feeling to give back, ain't it? Now since we was fetin' for ah good cause everybody was in a bess mood! The line was swayin from side to side and yuh swear de party was outside! lol

VENUE/ACCESSIBILITY:
Another easy location to find with FREEEEEEEE parking! Yes, I said FREEEEEEEEE! LOL J So pre-drinking was ah must! Now for those who have been to Tropical Sunset in de past were in for a shock.... the entire venue was renovated and the place was lookin rel niiiiiicceee! Ah was definitely impressed, change is always good ent?!

VIBES:
Infinity Sound Crew played ah nice early session that had the crowd on the dancefloor from the time they walked through the door. Loud Mouth Chiney was nice like rice and Dr. Jay De Soca Prince, leggo de beast from night til mornin ... yesssssss!!! E Man, your girl's voice of choice, made sure the ladies were winin' non-stop and Dirty Dez was talkin' all de right de tings!

Since this was an appreciation party, Dr. Jay ensured that fete-go'ers were in for a special treat! SKINNY FABULOUS (from St. Vincent) - the reigning 2-time Vincy Soca Monarch blessed the stage and had the crowd "fettin" all night long....that "magah man" had the ladies with "summer bodies" wukkin up like they "head bad!" FADDA FOX (from Barbados) was also in the building for his 1st Canadian performance, but ah sure he will be "staggerin" through Toronto again.. Now, no one knew til he ran on stage that this fella was in de building.... but special guest ZEEK was there to make sure the sexy ladies in de dance could "bubble it!"

With 3 big artists under one small roof, yuh know de ting selloff! It was level winin' and wavin' inside de dance... the vibes kept gettin' better and better as the night progressed and if yuh cudn't keep up, hard luck padna!

FOOD/DRINK:
Drinkin' Johnnie Walker...it nah eassssssy! Wheeeyyyyy!!! Yes! That was de chant for the night. There was a cash bar at this venue but there were 4-6 bartenders handling yuh beverage desires. It had plenty options but it look everybody was followin de artists who were chuggin' Johnnie straight! How much times ah goh tell allyuh Johnnie is de real ting?! ;-)

SERVICE:
Yuh must give ah little to get ah little.....and Dr. Jay surely gave alot! The music was on point, the vibes were off de chain and there was no false advertising..... all artists PLUS a special guest were live and direct!

COST/VALUE:
If yuh brought FIVE OR MORE non-perishable items you received $10 OFF admission all night.... so do the math! J Yuh get into a big fete with three big artists for ONLY $10 before midnight!!! Wha would you say?! I definitely tink fete-go'ers got ah BOOM BANG KABOOOOM for their BUCK!