Fete With The Saints 2010 Review 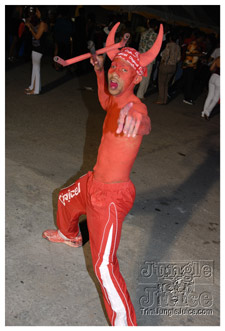 “Out of the shadows of the past you come to cheer us.  Boys of the old brigade of gallant CIC.  And our thousand voices ring in mighty chorus.  College of St. Mary’s College on to victory!”

As a third generational St. Mary’s Old Boy yuh know dat I go have nuttin’ bad to say about dis fete!... Or do I???

At TT$500, yuh really got yuh money’s worth and yuh was supporting a worthy cause all at the same time!  In stark contrast to QRC’s Outta De Blue all of our Big Sawats were not all sitting down for the various performances (dem Ole Boys was movin’).  The full spectrum of alumni came out for this event, from the recently graduated to past Presidents and Government Ministers, and most importantly all of the TJJ Crew!

The layout of St. Mary’s College allows for the segmentation and demarcation of zones all with it own intended vibe.  The Frederick Street Grass Court Yard was used for the entrance and with its calm foliage and many give away booths it set the most welcoming tone. The food was in the Form 1 Court Yard (aka Small Yard), and with the chapel and groteau nearby the food was truly blessed.  Some more food and bars spilled over into the Cafeteria Court Yard (aka Big Café) and which now more looks like a big cage with the newly installed fencing.  And de wining section was in the Basket Ball Court with the Digicel Stage erected in front of the Centenary Hall!!!

The first on stage was Dil-E-Nadan.  Their refreshing chutney repertoire was a good opener for any day fete.  As the sun set it was then time for some real jamming with Kes The Band!  Ok I’ve seen this routine before, it was solid as usual with back up dancers and all, but for this sophisticated crowd it would have been nice to have Black Stalin perform his “Trouble” duet with Nadia Batson (I tell yuh if dat had happen it would have been a real crowd pleaser)!  And speaking of complementing performances, it was my Digicel 'Doo Doos' dressed as belle dancers whose synchronized dancing according to the instructions in Nadia’s C2K9 hit “Bumpers Rule” was a show stopper during her performance!

Next on stage with Kes The Band was Shal Marshal & Screws who sneakily teased the crowd with their 2009 “Gyal Farm (ft Kerwin Du Bois)” hit and then worked the crowd to a frenzy with their current hit “Police!” Then, just like clock work, bursting onto the stage under a shower of red Digicel balloons was JW & Blaze with their mega hit “Palance!”  Do I hear Road March anyone?

After the dust had settled and some encouragement from the DJ it was time for Shurwayne Winchester & Y.O.U.  I’ve also seen this routine before, but this time he included an opening Scarlet Ibis flapping movement that made him look more like a Cocrico (oh it make sense now, he’s from Tobago)!  The St. Mary’s crowd clearly more enjoyed his offering in comparison to the Bacchanal Factory crowd the night before.

Now I need some refueling, off to de bar.  What’s dis, only 10 pm and scotch run out?!!  Better next time!!!  Aight let meh get some more food.  After two bake and shark, I now ready for anyting!!!  Back to de stage and after two full more hours of partying and I was good.

Fete With De Saints is always a good fete!  Now it’s off to Blue Range All Inclsuive!!! The night is still young for the TJJ team! J