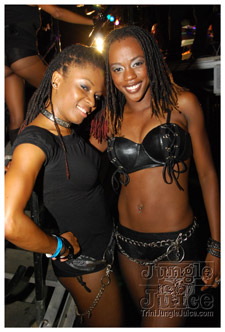 Rain Or No Rain? That Is The Question ...

So after Fall Out and Zante - we decided it was time to head down to Eyes Wide Shut Carnivale 2010! D'Local Juice was already there holding down the fort and battling his way through the wassy and jirating crowd while Young Juice, Daddy Juice, Red Snow Cone Juice and myself were on our way to help him out! Eyes Wide Shut will always remain the most attended event on Carnival Tuesday in Trinidad. The patrons always attend in black and many moods of masks!!!

CROWD:
Favourably dress in black - full of fashion and style - the patrons in Eyes tonight were admirably dressed - from sexy legs to sexy shoes to full on cleavage to tight pants and muscle tees - the entire dance was dressed to impressed (with few exceptions). Talk about RAM ... it was difficult at times to patrol through the crowd - there was always a crowd or even some one wining on another and blocking traffic! No Behaviour, I think is the war instructions for people this year, especially the foreign based crew and crews ... "No Behaviour"!!!!

VENUE/ACCESSIBILITY:
The Queen's Park Oval is always a great venue! It is large! It is central! It is easy to get to! Ample parking in and around the area! Bars on All Ends of the Oval like the inner circumference! In terms of designs and decorations ... well you cannot really decorate the sky? The stage was big and high enough so you had that elevated look when taking in the performances. Good Job!

VIBES:
With performances from the HD Family, Roy Cape, Swappi, Jason Williams (JW) & Bionic Blaze, Eyes Wide Shut 2010 was struggling a bit for vibes.  The DJs on the one's and two's definitely had the crowd during the changing of bands - however, sometimes live performances really do not do justice. However TJJ will like to endorse the following performances ... Swappi .... you do the thing real good and you keep the crowd entertained with those dancers man ... especially the lovely, shapely, & full woman (who say TJJ don't love big women ... I DO!!!) .... JW & Blaze ... we know you running the town red this year with "Palance".. never fails ... and last but least, Blaxx ... we love yuh too bad!! "Zombie" & "Haunting" are two big tunes, and personally I find you really under-rated but you still return every year ... HARD, HARD, HARD!!!

FOOD/DRINK:
We did not sample any food in Eyes Wide Shut Carnivale 2010, maybe because we came from two all inclusives, but the few people I saw eating seemed to be enjoying the food available. The drinks were in abundance and we were not told of any alcohol or non-alcoholic shortages! I guess is the recession ...

SERVICE:
The main fact that I did not see much lines or any long waiting periods for drinks means that the service was high on the charts and that people were working and TJJ supports the workers and would like to say thank you - because if it was not for you guys things will not be rolling!!

COST/VALUE:
The cost of Eyes Wide Shut Carnivale this year was TT$200.00. Did you get the value for your money? Comments welcomed...