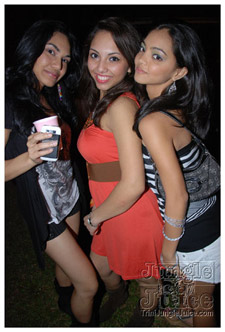 Being one of the regular staple fetes of the Carnival season, Karma Sutra was now celebrating its ninth year as an annual event. That’s right … 9 years! Another noticeable fact is that no matter what or who the competition is, the event has always held its ground drawing a large crowd each and every time. That is no easy feat especially when going up against other heavy weight contenders such as the “Alternative Concept” concerts which is always held on the same night. So in short … de people know what they doing!

Well we must say that Trini Jungle Juice is always most welcomed, and this year after passing through two to three other fetes all on the same day, we finally arrived at the Trinidad Country Club around 12:30 AM. Not to worry … We Fit & We Ready lol! This kinda thing we accustom too! Now after walking through a room decked off in an array of colorful décor, we soon stumbled unto a sea of people. Yes sir … party was in full swing and a band was also performing on stage too! Ravi B and Karma was giving folks a dose of their 2K10 recital with tunes such as “Dularie Nanny”, “Jep Sting” and the ever popular “Ah Drinka” to all of which the crowd was loving.

After Karma’s performance, there was a shifting in the crowd, as most went back to their base spots where their trusty coolers lay to get a drink and catch up with the rest of their lime. Now this was the first time to our knowledge that Karma Sutra was a Cooler Fete. Normally it’s a Free Drinks affair, and from feed back on the ground, most folks prefer it that way. Lewwe see what next year has in store …

During live performance intermissions, the vibe was very mellow overall. Around twenty past two this changed again as Imij & Co. took the stage, drawing patrons from far and wide. They put on quite a lively performance and had folks waving their balloons high in the air. Now during the course of the bands performance, they were also joined by other popular artist. Doing their big hit Palance, J.W & Blaze was the first to appear. Following them was Patrice Roberts who performed her song “Road Show” along with a couple of other hits, all to the crowd’s delight.

Imij & Co. ended the night’s line up of live performances at around 3:30 AM. From here on in folks grooved to the selection of the DJ, with roughly a hour of party time left. J’ouvert was slowly creeping up and who wasn’t leaving to go get ready to play, was leaving just to avoid being caught up in the festivities, which can become quite messy J.

Signing out from Karma Sutra 2010, remember … what goes around … comes around and when they do, TJJ will be there!