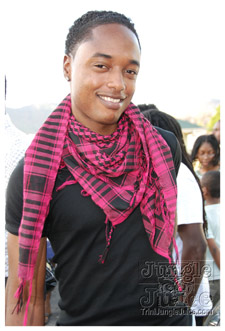 Alright people … lets cut to the chase on this one! Not on any given Sunday, but instead on Sunday 2nd May, twenty ten, Fashion Week Trinidad & Tobago turned the Queen’s Park Savannah into their longest runway.

In their attempt to shortlist down to the final 90 model spots for FWTT, quite a large number of participants were going to be heading home disappointed. Imagine 250 models were announced to be participating at this model casting, and out of that total, only 90 were going to be selected. Talk about pressure!

That wasn’t all, as FWTT also made these male and female models lap the savannah dressed in personally created outfits, which adhered to the theme “Cosquelle” and was of the color Magenta. A color that fell somewhere in between a shade of pink and orange. So imagine this … Sunday afternoon between 4 and 5:30 PM you cruising around de savannah, and see this large line of people (its 250 of them) dressed in Magenta and Black outfits walking around it. First you might say it’s a walk-a-ton or maybe some rally, until you take a careful look at the outfits some of these models were wearing … wowie!

After this daring walk, activities were then taken to the nearby club Zen. Here the 250 semi-finalist were called up on stage in groups consisting of about 8 to 15 models. Each participant’s name was announced signaling them to make a strut down the catwalk and back. After everyone’s name was called, only the names of the chosen models were called a second time. So if get to take a 2nd strut down the catwalk, I guess it meant that you didn’t make the cut. This procedure repeated itself until a total of 18 groups was called.