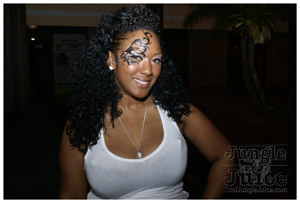 Back in full force and not going anywhere, De Whoops Massive proudly celebrates ten years of GLOW.  De Whoops Massive is headed by Smallie.  Smallie started as a reggae deejay and been hosting and promoting events for fourteen years now. He moved from Trinidad to New York, then from New York to Orlando.  Glow is perhaps Orlando's most elegant fete of the carnival season in which you MUST wear white! This year Glow featured 2010 Soca Monarch and Road March Kings JW & BLAZE with their smash hit "Palance" and the Prince of Chutney RAVI B with his 2010 soca chutney smash hit "Ah Drinka".

SG: Ravi B in the house!
Ravi B: Hello

SG: Does this song and video have any real truth to your life? You know you say Rum is your lover?
Ravi B: Laughing, None at all.

SG: So tell me do you prefer doubles or pylori?
Ravi B: Laughing, smiling, and thinking….um...that’s a good one... I prefer doubles.

SG: On a politically note how do you feel about the first female prime minister being elected in Trinidad?
Ravi B: Congratulations to her and I am happy.

Then onto the Palance duo!

SG: How was the concept of the Palance music video created?
JW: We wanted personally wholesome, fun, and happy elements. A lot of things you notice in the video represent what myself and Blaze stands for. I wanted to capture the office feel. We put cookie monster in there simply for something differnet and humorous. I wanted to move from de same ole scene ... the girls in two piece costumes wining, man on the beach and girls just running on de beach with coconut water etc.

SG: We know Palance means “Party, Lime and Dance”. What creative juices were flowing to create Palance?
Blaze: We do a morning show on Red 96.7 FM, and have actually been using the term for de last three years on the radio to describe different things that went on over the weekend at parties. Later we decided to put it in a song and contacted creative genius Kernel Roberts, with his melodic creativity.

SG: Did you feel you were going to win and rise above Soca Top Guns?
Blaze: Well we released the song back on November 15, 2009 and the song really captures the heart and minds of the people back home in Trinidad. Even though Machel and Faye Ann and other top guns had great songs, "Palance" was really unique and a crowd favorite.

SG: How do you feel about the first female Prime Minister being elected?
Blaze: History in the making! The people took part in the democratic process. It was a unaminous decision. I think most of the country embraces the change. I am happy for her. Hopefully she can indeed rally the nation into a better place. Congratulations to her and all the best to her team.

SG: What is something you would like your fans to know about you that they don’t know?
Blaze: We are very approachable and humble, in spite of our success. We appreciate our fans in US, Canada, Caribbean and Europe.

SG: Do you prefer Doubles or Phlourie?
Blaze: Doubles the only way, with slight pepper!

As I walk out of the VIP room the DJ’s announced that the performances were about to begin. The DJ’s continued spinning the needle to the hottest soca tracks as the crowd waited eagerly. Okay, the show starts and the sexy smooth Ravi B. takes center stage with "Ah Drinka". Everyone raises their glass singing the tunes.  The ladies screaming and wining, but let’s not forget our chutney lovers.... the only time I feel welcomed in de family is when I go down by yuh ... run it! ("Dularie Nanny").   The girls are finish ravishing Mr. Ravi and then the beat plays… Palancing when we on the road… and the crowd goes berserk! This song is intangible. Everyone has fire on their feet and taking a jumping including me.

TJJ would like to give a shout out too Smallie, Regan the President, Tha Vibzs, GE Sounds, New Wave, and Eternal Vibes. Once again to all the partiers, limers, and dancers TJJ sends love and appreciation.