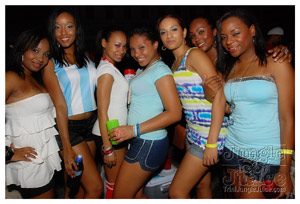 JAM … a cooler party with a football theme! Also acronym for “Just Add Music”, this concept was quite an ingenious idea seeing that the official World Cup tournament was soon carded to kick off. The dress code tonight as a result was primarily athletic wear, as many patrons came out clad in shorts, tall socks and representing in the colors of their favorite teams.

Arriving in this rivalry just after midnight, we gradually watched the crowd as it grew. Over the course of the night we also observed the vibes level, and how the transition took place to bring about the end result of an atmosphere of fun and enjoyment. Factors we believe caused this ... WAM! (Women, Alcohol & Music … see we could create acronyms too ... lol)

Musically, DJ Dane & Hollywood Sachy set the pace in the first segment of the party and then handed it over to XTC, who played the rest of the night away ... up until the dance ended. Selections were on point and pleasing to the crowd, especially the back in times session that played closer to the night’s end. Some how ah Super Cat tune still never fails to get enough forward!

Overall the night was one of good fun, so much so that mostly all the coolers that came in PACKED left near empty, as folks thoroughly enjoyed themselves drinking, socializing and dancing the night away. The lucky patron that won the 32” flat screen TV surely must have not regretted attending this party ... ha ha! The only drawback of the night was the abrupt and early closing off of the event. Circumstances that was probably beyond the promoter’s control we guess ... what you go do!!