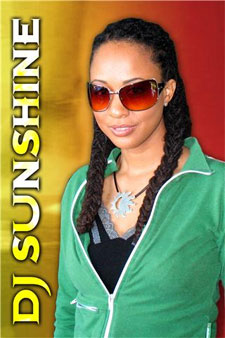 Popular radio personality DJ Sunshine is very pleased with the way things have been going since she began her journey in the music business as a recording artist. It has only been a few months since the IRIE FM DJ made her recording debut and she is having a very good time. With only a handful of singles to her credit so far, she has already begun to make a serious impact on the local airwaves and the dancehall with catchy singles such as A Doh Care Anymore, Run Some Money and Nuh Yard. The accompanying music video for a Doh Care Anymore is also receiving heavy rotation on music video channels such as RETV, HYPE TV, NTV and CVM PLUS.

DJ Sunshine, who recently made her stage debut at the monthly River Sundays event in Braes River, St. Elizabeth, describes the experience as a nerve wrecking but wonderful one. “I was very nervous at first, but the crowd response made it easy for me to deliver my songs as they gave me a very overwhelming response. Despite the nervousness I enjoyed every moment of it, it was wonderful.”

As her new found career continues to pick up steam the IRIE Diva says she is having a lot of fun as she juggles he roles as a top radio jock, business woman and artist all at the same time. When asked why she decided to take on a recording career this is what she said: “When I recorded my first single I didn’t plan on becoming an artist, but after I did the second one I decided to just go with the flow. The vibe is so addictive, I like writing and recording so much now, I never imagined I could have so much fun doing this.”

Deejay Sunshine is currently getting ready to drop another hot new single titled Hotness. This single which is on the Star Player is already receiving steady airplay on radio stations island-wide.