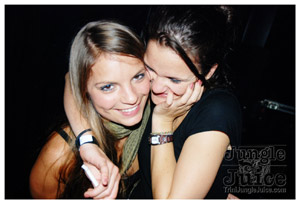 Munich is one of my favorite cities in Germany. This city is famous for its food and beer! Annually peeps from all the over the whorl trod to Munich for a beer drinking extravaganza called "Oktoberfest." Amazing! Say what u want but its damn sexy seeing hot chicks guzzling down 1 Liter mugs of beer. And then buuuuuuuurrrrp! God willing TJJ gonna bring the exclusive coverage come October. But on this night I roll up intoMunich once again with my Herbalze-it crew to burn the place down with music and test out my new official TJJ camera!

CROWD:
Before 1am the dance was scanty. Yeah, Germans into the late thing big time. I guess when the party goes on to atleast around 6am, there is no need to be early. It was a hot day weather wise, and even though it was cooling off, the air was still humid. Thus, a t-shirt and jeans night. In the earless, more girls than guys just how we like it, but later on in the night too much rocks! Yet still, straight music lovers in the dance so it sell off!

VENUE/ACCESSIBILITY:
The place is called Backstage. It's located in a sort of industry area, resident-free so nobody could get vex from the insane bass pumping from this venue. I heard that it was not such a pain in the ass to get to the venue by public transportation if u had no bike, car or donkey. Leading up to the entrance there's a food stall and a nice outside bar and chilling area, big screen tv present for the football ofcourse. I've dj-ed here before and liked the setting. Tonight we in the bigger of two dedicated party rooms, fully decked out with nothing more than some monster speakers, a few converted barrels for tables, hanging scattered lazer light effects and a big a$$ smoke machine. No frills and bullsh*t, just get down to the nitty gritty and run tunes kinda venue. And boy, what a crisp sound!

VIBES:
To put it simple, the vibes was off the Richter scale! Heat, sweat, screaming, jumping, waving and a serious lack of deodorant by some people all in the melee. Crazy!

FOOD/DRINK:
Fully stocked bar but at these parties beer, beer and more beer is what the people want. Prices are generally cheap for most hard alcohol but beer was down right ridiculously cheap. After the party on the outside we swang back to the food stall that was selling all kinds of burgers and sandwiches and other lil nicks and nacks. I had some french fries and one of the biggest beef burgers I've ever seen. Shit was scary with boo, yes boo falling all over the sides of the bun like some tyres on a fat ting! But, I tell you, it was liken finger and toes good!

SERVICE:
Staff and security were normal. Nothing to complain about here. There were no cute girls behind the bar so we didn't business with how them fellas were performing.

COST/VALUE:
Damage was €10.00. Standard for these types of parties. Of course the dj line-up was top of the line so patrons got value for their money ten-fold!

Big up Spiro and the Blazin Tiger Family for always showin us nutting but love and a good time. Professional promoters for real!

Look out mister Scorn Juice, as soon as I learn how this camera work yup title is mine!