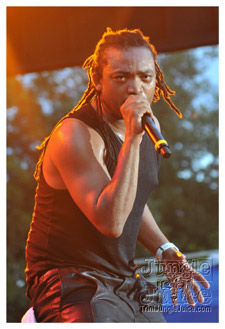 CROWD:
We were expecting to see the arena rammed out.  It was not quite as crowded as the show in 2008.  As a matter of fact, it was quite easy to manoeuvre through the diverse crowd of toddlers, grandparents and all in between.  I swear I saw a baby girl not even more than 6 months old!  Sorry but that's a wee bit young ent?  Anyway I digress.

VENUE/ACCESSIBILITY:
"The trip out to Six Flags is always worth it.  Especially when you can top off your day of rollercoaster rides, games and bad but good junk food with Mr HD himself!  This open air arena is a perfect venue for Machel and the HD family to entertain the masses like no others can.
The sun was blazing but no one complained.  At one point the skies were threatening and it did in fact rain for about two minutes the we were once again at the mercy of the heat.  It was like folks did not care because from what we witnessed the winery did not stop!"

VIBES:
"The usual level of heightened excitement was definitely in the air as the DJ's kept the crowd primed up and ready.  Lyrical opened the show and immediately had the crowd singing along.  Before we knew it Machel hit the stage with No Behaviour followed by THE anthem...Won't Stop.  The crowd went wild of course!  In true carnival bachannal soca style flags, rags and powder were rhythmically waving in the air.  for the first time ever, I was a victim of powder assault...ugh...well at least the powder kept me sort of dry.  Lol!

As expected Machel, Farmer and Patrice turned the crowd out!  Is it just me or does Machel sort of take you on a trip down memory lane?  Almost all of his songs have influenced our social lives in one way or another.  Sometimes you just have to hold your head and buss a wine yes! Lol!
Now, true to his style, of course there were a few young ladies invited on stage to demonstrate their wining prowess.  All I have to say is check out the gallery.  My lawd!

Shal Marshal also made a considerable dent in the crowd's energy toward the end of the show but the cherry on top was JW and Blaze!  The level of palancementation was contagious and amazing to witness...again!  The WHOLE arena was palancing!  Now that was a sight I won't soon forget!  I don't think that song will ever get old :-)  Palaaannnccceee!  And with that the show came to an end.  Then it was a mad dash to squeeze in a few roller coasters on our way out!   Mad props to El Toro! Lawdee!"

Thank you to CCB Promotions and thank you Hector for accomodating us.  This concert is always a blast!