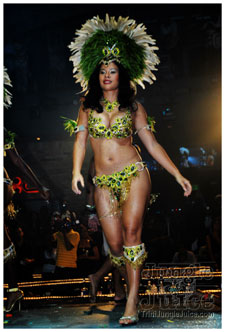 Spice is the best recipe for Carnival, with a focus on fresh faces, concepts and innovative ideas, their goal is making Carnival better! They achieved that goal by putting a signature collection of spices in this carnival pot and it is "cutting". Well let me be honest when I say, I barely notice the difference with Carnival Costumes. I hear people going on about, "I'm not playing with this band because their costumes are the same as last year" etc, etc. Now although I do find ALL carnival costumes look the same, I never really saw costumes like this. Some were simple and effective, whilst others were large and powerful.

One of the models actually got stuck because of the size of her costume, but the crowd at the world famous Zen showed support and cheered her through. At the end, the costumes were excellent, which would make undecided persons more compelled to play in Spice. Spice also made a promise about having a maximum number of clientele in order to make sure you had the best Carnival experience you could have.

I can definitely see this band reaching places, and as a matter of fact, it has reached a big place and is definitely a band to look out for for this upcoming Carnival season and future years.

The only negative at their launch was that there was no real difference betweeen V.I.P. and General other than location, but they had a nice Media area to make up for that.