The planet's resources we recklessly squander.
In our quest for riches, her land and sea we greedily plunder.
For beauty truly is a savage beast,
Then the stars at night it's bountiful feast.
Life and Limb for gems and ore,
Man's price paid for fruit from the planet's molten core.
All we see and wish to own,
Less we forget that earth itself is our most precious stone 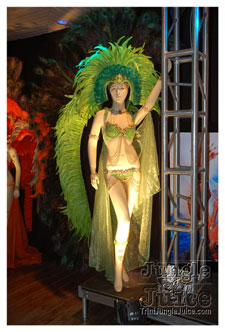 Harts brings to us this year PLANET ROCK!! Setting yet another milestone it will be their 50th year of carnival presentation, and I must say this Oldie sweeeetttt for their age LOL....now everybody knows Harts Band Launch is more about the party, drinks, having a great time to kick off the carnival season than a launch "presentation" of the costumes. NO media launch, NO models, NO waiting for presentation...You enter to your left there is a room showcasing the costumes and straight ahead party and VIBES!!!

First let me deal with the costumes... :) Can someone say EVERBESS!! Yes, i said EVERBESS!! they weren't just besss in my opinion Harts giving some stiff competition of sexiness on the road this year....My favourites had to be Moonstone, rhel lovin' the white costumes this year...Howlite, and I LOVE the earth feel I get from the Sardonyx section...this strappy number just SEXY without using so much stones or feathers.

Now to be honest I was a Harts Band Launch virgin and I didn't know what to expect but when it came to the party, even though the majority of the crowd wasn't in my age range this party had vibes, they gave patrons alot of FREE ALCOHOL even if you didn't walk with your own cooler, there was a cocktail bar offering FREE mojitos, margaritas, daiquiri's  and mudslides. They had ladies giving out free tequila shots and even a booth giving out excedrin pills for the next morning to help with that bad hangover LOL.

By about 1:30 am the place was RAM packed with people, so much so I could barely move or find my other TJJ peeps. Harts ended the night with some more alcohol, good performances from Imji. & Company, Patrice and Swapppiiii...hmmm more alcohol music and vibes!!! I'm sure Harts gonna have there usual vibes on the road and masquerader's won't be disappointed.