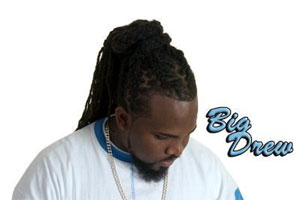 A true TRINBAGONIAN, born in Sangre Grande, spending his early years in Toco, before attending school in Tobago, Andrew “Big Drew” Ewing can best be described as an ultra expressive lyricist, capable of creating verbal imagery. Out to set his own unique stamp on the music world, which is made very evident by his signature catch phrase, "I COULD NEVER BE YOU".

Heading into Carnival 2008, Drew currently has four offerings to be unleashed on the public at large, namely "Burning" a socially conscious number on a catchy beat produced by Blade, the mid tempo grove trilogy that is 3 D Hardway; "Waistline Thumper", "Carnival Time", "Bang-Bang", three tracks produced by JusShane, which serve to show Drew's lyrical dexterity creating three different musical vibes all on the same beat.

Listen (click on song title) and tell us what you think of their song today... Dig It or Ditch It? Please keep it HONEST, yet CLEAN!

Real Player will be needed to experience the music

With all the new Soca releasing left, right and center from both established and upcoming artists, each week leading up to Trinidad Carnival 2008, we will feature a New Artist and their offering for the 2008 Carnival season.