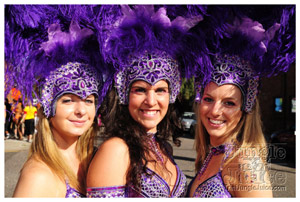 ... The Last Day Of The Biggest Carnival In Europe ... Do We Shed A Tear Or Wine Like No Tomorrow ...

We’re getting prepared, hurry, hurry… my girls and I were not supposed to play this year but Lagniappe, the band has a few costumes left. “Let’s just do it”, one of my girls says without hesitating. “We’re gonna have a blast!!”A few phone calls after, we were running to catch the band which has almost reached the stage. We jump into our leopard costumes and look at each other, now we are ready.
Now in Lagniappe there were a variety of costumes:
> Some sexy… tights/shortpants that shows curves, little top with leopard print and the hat to match;
> A Variety of yellow, purple, orange & blue Pretty Mas Costumes ... i.e. ... the feathers & sequins ... all of which are courtesy TriniPosseUK; and
> Some Jerseys & Fun Mas Costumes were present.

Had I known when I left that morning that my feet would look like a hobbit’s all swollen, I would have considered my choice of shoes once more.
Because it is no lie….once you are on the road you can’t connect mind to body. Mind and soul is devoted to the music. For months now, we charge up. And now we can set the carnival spirit free….we wick..ke..ke.wicked, we can’t tired, so move out the way!!! BOOM!! Once we got on the road we danced like we had 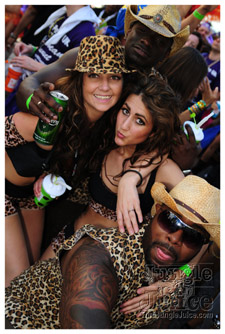 never been doing anything else. A little wine here and there. The waistline was outta control.

What have we been drinking? Ohhh lawd. I think I was getting scotch and rum the whole day….I think. Don’t mix, only if you sure your stamina can handle it. At one point the band ran out of drinks. Uhm, that is absolutely one thing that is unacceptable….maybe it was just for 20-40 min but if I notice something is wrong. For those minutes I also realised that we didn’t have a wee wee truck. Now this is always my concern hence I don’t have a trunk I can pull out. I wish God created us women to be better designed for carnival and other outdoor events. Anyways, wee wee, we did elsewhere…

Everybody in the band was happy. I kept looking at this couple who were chippin’ on the side. The woman in front, pregnant and her man behind making sure that nothing happened to her. I’m sure the little baby was palancing in there. No matter what age, colour or state of mind – we can all play mass together. This is truly a time where people come together, this band was representing well.

I actually think we were shining a bit too much, having too much fun…. For some reason the people who were not in the band thought they should be a part of our party. Well we do seem welcoming and we do like to show them how to have fun, but it became a bit too rough when everybody joined the band. The security had gone to lunch break and hadn’t come back so we just had to accept less space for us to dance and be amongst aggressive drunk people. For next year - we love the band – but we love to feel safe too - Lagniappe Security was needed. Every Single Year ... I Think is the same thing ... 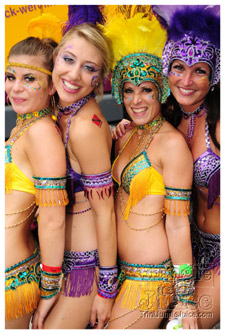 Music was bess!! We were jumping up in the King road, move it because we nahhh behave. People were enjoying themselves to the fullest. It seemed like people didn’t want to stop ... even when we came to the end a the truck pulled to the side ... and thats right BLOCKO!!!!!! Everybody were starting their own little party around the truck still getting drinks and dancing.

The day with Lagniappe was too short. We could have used more….yes yes, I at this had my hobbit feet but the sweet stamina can’t listen to heart ache, feet ache, head ache….We all needed more. My crew and I left the band with a good taste in the mouth. We came, we laughed, we wined - our deed was done. We left, found a next band and showed them how Lagniappe girls “go dung”.