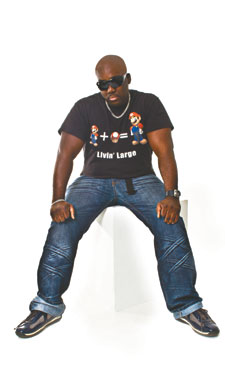 Whether as the host of Tempo's hit regional television show, 'Rollin' or the popular 'Road Block', 'Club Red' and 'Madology' programs on RED 96.7 FM, you're bound to either see the face or hear the voice of Devon Matthews everyday of the week. This multi-talented young man aims to become a media and entertainment mogul and is currently working assiduously toward his goal.

"I've been working in this industry for over four years now," he explained, "and while just being on radio is a dream come through, I definitely want more! I had a conversation awhile ago about my career with Machel Montano and he basically told me, that I wasn't serious enough about what I was doing yet, so I couldn't expect to achieve what I wanted yet. Now I took his comments to heart and analyzed my situation and realized what he said was right.

"Quite often, we start working toward a goal and from the time we surpass the first few obstacles, we tend to relax and not work as hard anymore. So, I took a good long look, saw what was missing and set a whole new schedule for myself."

Matthews said he chose to strategically eradicate all leisure activities from his life and thereby accelerate his productive capacity. Since then, the 28-year-old entrepreneur has managed to build, staff and launch his own audio and video production studio (HP Productions) in Santa Rosa, while simultaneously fulfilling his radio and television program schedules and working on new music for Carnival 2011.

"You have to be prepared to really work hard for whatever you want in this life," he advised. "Here in Trinidad, we tend to have a kind of mentality that we only need to work for three out of the five weekdays, relax for two and party for the other two. We ain't even talk about all the holidays yet! I was surprised at how much more I am able to achieve when I approach my days differently and try to be more productive each and every hour of every day. These days, I'm always either at work, at the gym, or in the studio with producers like Julio, Neil Bernard, Daryl Braxton, SMJ Productions and of course, Kelz."

Today (Friday Oct 8), Matthews releases his first single for Carnival 2011: a Groovy-Soca selection entitled "Turn Me On", which he recorded on the soon-to-be-released Degree Riddim. Produced by HP Production Team member, Kurtis "Kelz" Wells, this riddim will feature a host of popular acts and launch Matthews' extensive Carnival campaign.

"I'm going all out next year," he said, "Two-hundred percent! I've got a lot of songs written, a good few recorded already and because I intend to enter and experience a lot of the competitions, I'm releasing a lot of new music throughout the long season. People can expect to see and hear all sides of me next season: fast and slow Soca, traditional Calypso and everything else I have to offer. Look out for the FM movement rising steadily. That's another project I'm working on, but its so sobolious, I can't talk about it yet. I'm a fun guy and I like to make people laugh and have fun, but when it comes to work and my career, I'm so-o serious now!"

Matthews will also launch his own vlog (video blog) series on Facebook and YouTube leading up to Carnival 2011, which will include his MC duties at the upcoming "Rep Your Colours" concert, featuring International hip-hop phenomenon, Nicki Minaj.

"I have a lot going on right now," he said, "and I want to share all these experiences with my fans and supporters. Everything from working on music in the studio, to shooting new videos for myself and other artistes, to working out in the gym and preparing for my performances, competitions and hosting duties. I want to inspire the next generation the same way hard-working acts like Nebula 868 have and continue to inspire me to work harder to make my dreams come true."