When Paris falls in love with Pan 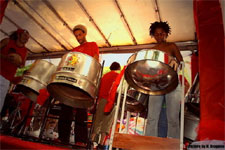 It all started with a simple trip to the land of Calypso, right before the Jumbie Spirit operated and got hold of these three such different personalities: at that time, Guillaume Kervel, Barthelemy Fougea and Emmanuel Masselot were just realizing what it would all be about in the next upcoming years...

Something like their first wonderment was now beginning to take shape and it fell on pan: as a result of what on the 8th of June 1993, an organization under the name of “Calypsociation” was created in Paris. From this moment on, things started to take bigger proportions all the more motivated by bigger expectations and the founding fathers began to see in Calypsociation not only a way to spread the steel-pan culture abroad, but also to work on Franco Trinidadian international relationships.

Spreading the culture and the love for pan is one thing, but seing how different musicians with diverse influences and backgrounds managed to come all together to create a cool and colourful atmosphere, stands definitely as the best witness for the success of such a committed undertaking. It is their own way of representing Trinidad and at that point our French calypsonians are extremely proud! Their musical repertoire is very extended: it goes from traditional music pieces from the home land to their own compositions more modern and still as groovy.

“Some people even come at us for educational purposes: french private firms contractors believe that a steel-band’s exemplary cohesion serves as the best illustration for togetherness in a group, and should inspire the working teams in that sense. We have a very large public here at Calypsociation: school kids, youth and elder pupils.There are all in all more than 150 musicians from various levels.“

Adding to this street concerts, local festival performances and remarkable appearances at the french Tropical Carnival (just to name a few), Calypsociation proves today again that steel-pan is not likely soon to stop from making the heart of Paris swing!

Recently Calypsociation steelband released its latest album officialy entitled “Made It”. With song titles like “Sunday”, “Doh rock me so”, “Sweet Mango” or “Party Tonight”, this smashing piece of music appears to be definitely this vivid tribute to that land that taught them so much and according to Calypsociation it just sums up perfectly well all the love for pan Trinidad passed on to them.