One on One with Pablo Moses 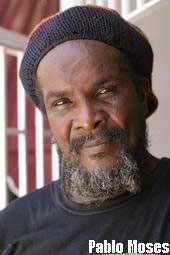 Born in 1953, in the rural Manchester part of Jamaica as ‘Pableto Henry’, veteran artist Pablo Moses is best known for his phenomenal burst onto the reggae scene in 1975 with the controversial song: ‘ I MAN A GRASSHOPPER’, from his debut album: ‘REVOLUTIONARY DREAM’. Over the years, Pablo Moses has released a great number of records, among which we can count big hits as such as: ‘WE SHOULD BE IN ANGOLA‘ or ‘GIVE I FE I NAME’ also from his debut album. But we can also name a few other albums like: ‘PAVE THE WAY’ (1981), ‘IN THE FUTURE’ (1983), ‘TENSION’ (1985) or ‘LIVE TO LOVE’ (1988). Pablo’s lyrics are message lyrics based on experiences in his personal life often mixed with innovative and unique arrangements. His wide reading of Steve Bike, Markus Garvey, Edward Brathwaite and other black liberationists also considerably affected his lyrics.TriniJungleJuice wanted to take a look back and follow the progress of an entire life commitment. We met the artist back from his recent tour in Africa after his latest performance on November 29th 2007 in France...

TJJ: Does having a name like ‘Moses’ already involve itself a certain sense of consciousness?
Pablo Moses: Yes, and as a matter of fact I didn’t choose that name ‘Moses’, you know. Because the name that was actually given to me by my mother was Pableto Henry. But when I was younger, because I was big in physical status, most of my friends usually called me Pablo. Then when I went to high school, I was involved in a lot of talking and debating, and speeches and dramas, and so forth… so whenever there was going to be any fights or anything, I would always come to talk to squash it, so they started to call me ‘Moses’. That is how I got the name ‘Moses’ and you know, when I did my first song I needed a name, so I decided to take ‘Pablo Moses’ and this is how this name came by. But I think it’s a positive name, because the same way Moses used to strike the rock to bring forth water, now I, Pablo Moses, I’m striking the musical vibes to bring forth passion. So it’s a different vibe but it’s almost similar.

TJJ: contrary to many other musicians of your time, you chose not to give up your studies for the music: was it your own way of making the difference?
Pablo Moses: Well, I would say that wanting to be an artist was always in me from when I was very little. So I think that when I taking that course in Business Administration and Economics, it wasn’t for me, but I was doing it more to make my mother and the rest of my family feel comfortable, because they didn’t really look towards the arts as such. Most people in those days thought that becoming a teacher, an accountant or whatever would make you more successful… But when I was going through it all, I was still writing songs. Unfortunately, all of the songs I was writing had almost all similar sounds because I had not learned how to play any musical instrument, so I got myself and old guitar and I started practising. I also bought myself some books on musical theory and I created new progressions, then I added lyrics to those progressions and out of that came the album: ”REVOLUTIONARY DREAM”. After that, I decided to acquire more fundamentals of music and with the little that I had, I went and took audition at Jamaica School of Music and I passed. For two and a half years I did some theoretical music, studying the basis of different music styles like Rock’n'roll, Blues or jazz and when I came out of that I felt ready…

TJJ: As a veteran artist: what are your views on the nowadays reggae scene?
Pablo Moses: To me, it’s more like a circle with all that has already been before: in the late 50’s it was Ska, which was a happy thing, then in the 60’s you got the rock stage, and it was more romantic, with more romance, then with the 70’s came more revolutionary music called reggae, with the Ska integrated, but at the same time lovers rock was within too. Finally in the 80’s you got the dancehall and there was a certain decline of positiveness. But there has been a certain amount of more positive influences coming into the music since the late 90’s and the early 2000. But I do think that a lot of the slackness part in the dancehall today is getting us nowhere. I’m definitely not with it and I try to make my children at home not listen to it either. However I do think that a lot of the positiveness is coming back again into the music. It might not be getting the exposure that they deserve, but I think that there’re still positive prospects for positive music: a lot of good artists are coming back in the scene and I’m still optimistic about the future of reggae music, especially with the persistence of people like myself as a veteran, still here to ensure the youth that they can achieve a life out of this too by speaking positiveness, you can live good. You don’t have to rush things to get the money, because nowadays that’s what some of the dancehall songs are all about: quick money, to drive a hype car, and get all the Gucci’s and the long chains…but it is a work that should involve not only the artists, but also the agencies and the promoters for us to change certain values..

TJJ: Do you consider your own music more like revolutionary poetry or is it just music before anything else?
Pablo Moses: I consider my songs as being a try to incorporate other forms of music, and that is what is so great about reggae! You can incorporate other forms of music within reggae and it is still reggae, that’s one aspect that I love, because I love to explore, I don’t see why I should confine myself. Sometimes you can add a little bit of Blues and add a little bit of Rock and you can also add a little bit of Jazz within your music to still attract other people, and like I was saying before: that’s one aspect. Then there’re lyrical contents and I do think that my lyrical contents are more revolutionary, indeed. And I don’t mind! I love it! I’ve tried to write other songs but it’s difficult. I wrote some lover songs too but most of the people said that my lover songs sounded totally different, but you know I have to show respect of the women and that’s the type of lover songs I write. And realistically, I think I’m a revolutionary person and I prefer to continue being a revolutionary person. I have to apologies to anyone when I say what I’m saying in my songs. Some people might not like it, well that’s life, some other will, and that’s what an artist is: you create and you love what you create and like I say: the best is yet to be made.

TJJ: You just came back from your tour in Africa: what are your impressions? What is your relationship with Africa, especially as a Caribbean artist?
Pablo Moses: Africa is my mother and father, we as Jamaicans and as Rastafarians especially, we consider Africa as our first home. We look at ourselves as Africans living in Jamaica, because in reality it’s the seed of Africa planted in Jamaica, like in any other island, so you’re still an African-Caribbean and that’s how I look at myself: I’m an Afro-Jamaican. Now what do I think of Africa? I think that the people of the country where I’ve been in Djibouti are very warm and receptive. My first concert was good and the last concert was overcrowded…there were so many people and I was happy to try to touch as much hands as I could. I felt good as I embraced the trees of Africa; I touched the earth because it was actually my first time physically in Mother Africa. I had never been there before, so it was like jubilation to me. I was ecstatic and I still can’t get over it all now. I hope that I can reach Africa again shortly, because I’d like to go everywhere in Africa as much as I can.

TJJ: And what is your view on the general situation in the West Indies?
Pablo Moses: I think that in the West Indies in a whole, we have been growing and maturing. We might sometimes have lost certain directions but overall there’s a sense of unity now that is coming in the West Indies, especially since the form of Caricom. And we have also seen that it was a struggle from way back in the 40’s when one part asked for Referendum and the other asked for the integration of the Caribbean. It did not happen totally at that time. I do think now with the form of Caricom and the leaders that are coming together on the common understanding that we don’t need to be separated any longer: Trinidad cannot do it on their own, Jamaica cannot do it on their own, Guyana cannot do it on their own, Barbados cannot do it on their own, etc… So they are all coming together now in the form of one entity, which is Caricom. There’re also now letting a form in the Caribbean: they call it Caribbean Court of Justice, and with it, it is also very important that we show the world that we are intellectuals in the Caribbean also. We can also be judges of high esteem and high lawyers we don’t need to run to the prime council of England after so many years of so called independence. But I think that we also have countries like Jamaica where the conservatives would prefer not to move away from the prime council of England, because there’re always so called elites that prefer to have the grip on the masses, and that has a kind of slowed up some of their achievements and certain accomplishments that we would make in the whole Caricom organisation and family. But there’s nothing impossible and I do think that frustration is going to reach those so called elites after a while, so this will be accomplished: the Caribbean will be one entity. One body. And to me this is already an achievement and a good start when they go on negotiation with other countries as one body. The struggle continues and children in tertiary education in the Caribbean have to help to continue paving the way for these accomplishments to materialize.

TJJ: You are on TriniJungleJuice.com, the first Caribbean website to take you Global: do you have a special message?
Pablo Moses: well, my special message to TriniJungleJuice (and as I noticed you said: let the juice flow), well let it grow and continue to grow for the unification of the Caribbean and we need Caricom to be strong! We need our people to be strong, never give up the fight. Think positive of yourself just like I say in the song: READY, AIM, FIRE’: ‘ constructive results is better than self insults‘ a lot of people insult themselves saying that they can’t do this or that. I do not like the word ‘can’t’ throw it in the garbage. Think that: I can and I will! And I think that we, Caribbean people, think that way: we can and we will accomplish it, because we’re strong enough. We just need to be stimulated, that’s it, so Jah guide and protect you all and continue the struggle for your equal rights and justice in the world. One love! Bless and love everytime!!