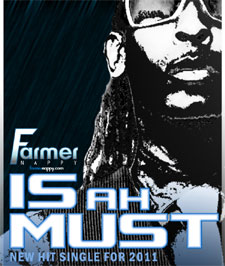 Farmer Nappy's second release will be one of two up-tempo songs for the Carnival 2011 season. Set to release Wednesday 15th December, 2010: "IS AH MUST," is written by Jason "Shaft" Bishop, Darryl Henry, and Kernal Roberts and also produced by Kernal Roberts.

This song is expected to instigate a vigorous wining frenzy! With lyrics like "PUSH IT OUT RIGHT OUT TIME TO GET ON DUTTY DUTTY STICK YUH TONGUE OUT YUH MOUT' and "GYAL DOH RUN STAND UP AND TAKE IT GYAL DOH RUN," one can only imagine the rest! Farmer has stepped out of his regular comfort zone and dropped his guard!

Instead of jumping on a 'riddem,' this year, Farmer has concentrated and invested his time, money, talent and energy into bringing Trinidad Carnival 2011 three quality productions, all produced by some of the top producers in the industry. Each producer was hand picked for each song and they have thus far done each song justice!

"FLIRT", Farmer's groovy release, produced by De Red Boyz is doing extremely well. A video will soon be in the making for this sweet, fun loving Groovy track. Next on Farmer's release list, is his final song for Carnival 2011. Set to release on January 1st 2011, straight out of the KNS Studio, written by both Darryl Henry and Kerwin Du Bois be Prapared for a "SHUT DOWN".