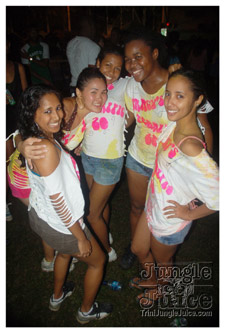 We stepped into Dutty Santa which was held by STS Promotions who did the party Osmosis which was responsible for the flooding in Port of Spain a few days later. If you didn’t see Santa in his leggings DJ’ing in the parties you must have bee living in a Cave. This event was a merge of STS Promotions, M.A.S.E. and Redymix. Every party in the West was shut down by this party I believe. It had so much people that it had issues entering the venue which after talking to them I could see it would be addressed in their next party.

It had non-stop vybz and even though the gyro man didn’t pull through it was a free drinks Cooler party with Free Doubles . As soon as you entered the venue you were greeted with a Heineken and then you could have proceeded to bubble anywhere on the field. A water truck came later and sprayed the party with water and people started throwing paint everywhere creating a real jouvert experience. All the ladies were in their pump um shirts, some wrestling in mud others wining with paint.

This party was not for the “stush” (Definition: those who just like to go parties for bragging rights. E.g. Don’t dance on her because she is stush.) ....  it was simply for those who wanted to have a good time whether you accustomed parting in 51 to chilling in  Alchemy.