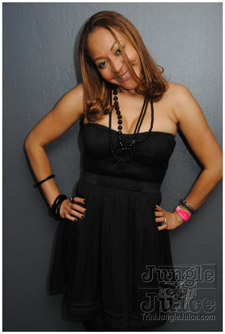 This time Christmas really came early with a nice vibe for the holiday season. A mixture of artist came together to support the Urban League of Hudson County in their positive activities to support inner city young to make it towards a promising future. The night consisted of a lineup of musical acts, from various genres of music. Unfortunately we only got half of the show we were promised. It's alright, because it seemed like the entire crowd was watching for the headliner, soca phenom, Mr. Machel Montano HD and friends, Farmer nappy and Patrice Roberts. R&B sensation, Chrisette Michele, also stopped by to grace the stage with her soulful, sweet voice, per morning a few songs from her new album.

We rushed through the hectic Manhattan streets in search of the Park Central Hotel. It seems like the flyer was off by a block. Not good for a cold New York City night. As I walked I sighed in relief that I chose the train over driving through gridlock traffic. Parking would have really killed time and probably would have been next to impossible. The Park Central Hotel was a fabulous venue, for this classy chic audience. No wonder the tickets were a bit steep. The upper leveled balcony was primarily VIP seating, where VIP guest were fed fruit platters, cocktails and roti's. The lower level was the stage, dance floor, cash bars and seating for the other attendees. The show took some time to get started so we waited around, took a few pics and watched as guest strolled in clad in floor length mink, fur coats. They definitely had a sense of expensive taste.

DJ Spice kept the guest entertained as the waited for the main event. The highly anticipated lineup of performances. Buzz started going around that Gyptian was a no show, and honestly it broke my heart. I would have loved a nice reggae performance. No scene, still geared up for Machel. Caribbean radio personality, Dahved Levy, was the host of the night and give us some insight about the organization we were out to support. A live band started up and boosted our energy levels, then a few opening acts came out. . . And then there was a break. Back to waiting. Anika and I started getting a lil antsy and thief a roti in the meantime to share like bad little school children. First performing act took the stage, Chrisette Michele, who told her brief story of how she is a product of the Urban League. During her very brief performance she showcased her brilliant voice. That girl can sing! 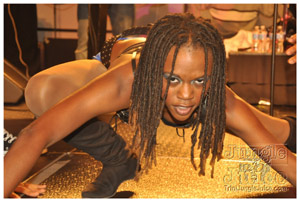 After her performance, it was back to waiting. Folks hit the dance floor for some Cha-Cha Slide and of course the Electric Slide. Everyone was having fun despite the mixture of nationalities and cultures in the room. Americans mixed with Caribbean natives to have a nice pre-Christmas celebration. We tried to kill some time at the bar, and ended up sending all of our Christmas money. $13 for a mixed drink...chhheeesseee an breeeaadd! It was announced that Jazmin Sullivan was in the building but wasn't feeling too good so they cut straight to Machel! No one seemed to mind, he was the anticipation of the night!

The show started out with Farmer Nappy singing his tunes like Chippin on d Pavement. Patrice came out and sang a bunch of her tuned, and really wuk up the stage with her dancers. The main event came, Machel Montano did all of his tunes and even gave us a taste of what Carnival 2k11 had in store. He really shinned down the place and the women were going insane. They couldn't stop grabbin for d man crotch. . . Jeeezzuuum! Machel really put on a show, a show so bad that his performance caused a power surge in the entire hotel. Even with no power, the show carried on. Machel and Nappy still whined down the stage and broke into some real Caribbean folk moves from the coal pot days, to the sound of a drum beat and the audience voices. A nice way to wrap up the show. The wait was worth it.