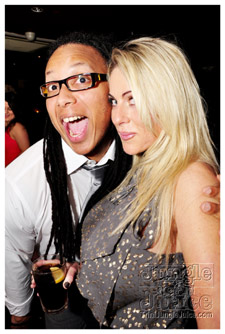 New Year's celebrations in London are always tricky! Peeps tend to fit into two camps at all times - those who stay home and can't deal with the overpriced clubs and taxis and those who venture out determined to hit the party scene hard and bring in the New Year getting wasted somewhere HUGE!

Normally fitting into camp number one, this year TJJ UK decided that there might just be an alternative...a party that is designed to be intimate with a top DJ on the decks all night! Love it!!!

Disco Daze isn't just for new years... this has started to be a regular night all around the country with popular nights down in Brighton and West London. The music is banging!!! Old school vibes that you can't possibly sit down to and that had half the crowd spinning round demonstrating their best dance moves! Ever seen someone do the car dance ??? Trust me.. pure entertainment ! !! Tonight's crowd was small but entertaining, everyone was out to ensure 2011 got started with good vibes and real laughs.

Drinks were flowing, there was no wait for anything and there was a car park right next door...so tonight definitely took the hassle out of New Year's for sure!! The best thing by far tonight was the music...we heard some tracks that we haven't heard in years... true classics from the 80s and 90s from Disco and Funk to old school House and Garage.

If it's a hassle free, friendly vibe for New Year's that you wanted, you couldn't go wrong and if you love your music and want a bigger crowd.. get yourself down to Disco Daze in London or Brighton sometime in 2011 for what is bound to be a fun fun night!

Wishing everyone great vibes for 2011!!!