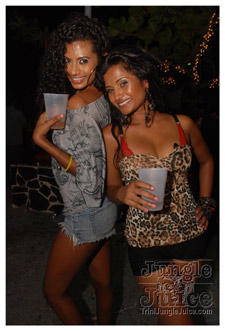 So TJJ went into Rebirth which seemed to be the place to be if you were a UWI student who enjoys cooler fetes. The party was held in the Military Museum which seems to be establishing itself as the new St. John’s. This party was thrown by an up and coming Jungle Juicer Keyon Mitchell so of course we had to be there to show our full support. The party ticket was cheap being $60 for girls but delivered on quality and entertainment with all star DJ’s like Joel D Boss and J2M to the ever entertaining Rapid Response.

Well I didn’t sample the gyros but I did see other people taking it. I also heard reports of the gyro man leaving his booth to bubble on the sexy girls but I have no confirmation on that. It also didn’t have foam but where the party lacked “added bonuses” it had insane vibes.
This party was the Rebirth of both Liquid Dream Entertainment and essentially Ground Zero Promotions (GZP). I rather GZP be called the Pirates of the Caribbean(mutiny) though... inside joke but what you do do they throwing successful cooler parties. Maybe they would use that name for a boat cruise. The party was fun and was a kick start to the Carnival season for UWI students. I should also say by UWI student I simply mean young people who are pursuing a degree aka educated young adults. I should also mention that the UWI ratio is 4 girls to 1 man. Which makes a really good for a party.