9-year old Devyn, The Youngest Heir to the Soca Throne 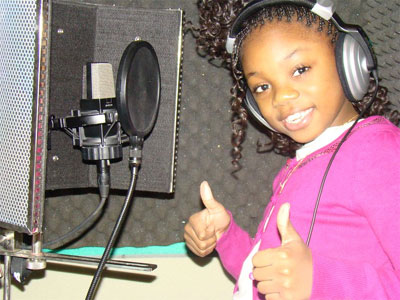 Friday 11th February, 2011 - Her sweet but sassy smile, draws you in, while her implicitly perfect manners lower your guard, and her pretty face that will surely one day be beautiful seemingly summons cameras out of nowhere. And then she steps onto the stage mike in hand and completely blows every Soca loving soul away with her charming presence, unlimited energy, and entrancing performance skills that had the King of Soca, Machel Montano, declaring that the empire of Soca was in safe hands with this Soca Princess.

Devyn, claims to be just a regular girl who happens to like to sing, a lot. With her favourite subject in school being Math, and her clear understanding that “Without school you really won’t get far in anything,” she appears to be, and is, a sweet girl who loves her life and works hard. On the surface it is quite easy to believe her, until you witness her command a stage like no other 9-year-old girl ever has. She whips every discerning Soca crowd into a celebrating mass of joyful revelers, who answers her calls to join her “In the Islands,” her very first release with her big brother in music the masterful Lyrikal, who also co wrote and performs the song with her.

Produced by the very talented Shawn “Da Ma$tamind” Noel, this is Devyn’s first official foray into Trinidad and Tobago’s carnival. One might think she is simply lucky to have such skilled hands in the business working with her, but when asked both men expressed how very impressed they were by Devyn’s diligence and work ethic when it came to her beloved Soca music. Shawn said, “She actually studies dvds of Soca performances, so she can improve herself and her craft, that is amazing commitment at any age, but at 9? Incredible!” When asked if he would feel strange taking the stage with such a young co-performer Lyrikal smiled and remarked, “She might be young, but when she hits that stage she is a full professional, and it is always a pleasure sharing the Soca stage with anyone who enjoys it and takes it that seriously.”

Devyn herself tells us “I love Soca, I love everything about Trinidad and Tobago’s culture, my family is always playing the music and teaching my brother and I about it, it has always been a part of my life, I even sang a Soca song for a school event.” Coincidentally it was after her mom placed a video of her singing Soca on youtube, that the requests to have her perform from Miami to all over New York started coming in. Through her gigs she has met almost all of her Soca idols including her favourite, Patrice Roberts, whose stage energy inspires her to be the best she can be. At one of the events, she worked up the courage to go directly to Machel Montano and ask if she could perform with him. Machel says it was a first for him and she was so brave the only thing he could say was “Yes!”

She started singing at 4 and took it on as a profession by age 8, and this carnival she is looking forward to her ‘trini debut,’ in which she wants people to expect, lots of excitement, fun, and humor.

“I just want to make sure everyone has a great time, and getting to sing for so many people is an honour really.”

It is rare in this world that one so young finds her passion so soon, but it is clear that Devyn has found and is enjoying hers. With booked performances at Army Fete as well as quite a few all-inclusives she is well on her way to following her dream of just making people happy with her music for carnival 2011. She arrives from February 18th and leaves March 8th giving all of Trinidad time enough to welcome and surely embrace the entrance of this true Soca Princess to the world’s greatest show on earth, ensuring it will be a memorable season indeed for both Devyn, her many supporters, and soon-to-be won over fans.