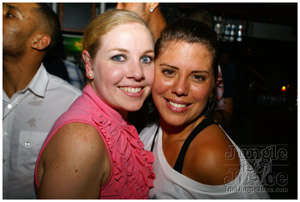 We did this party a few years ago so it was nice to be invited back and see the growth. Strictly for Arubans by Arubans. Dush Yui is a party in Holland celebrating their Aurbian carnival which as I understood was in its 57th year on the island. Hopefully next year we'll be there in living colour to partake in their island carnival festivities. But for now we in freezing Holland, and tonight a strong breeze blowing, pelting people off their bikes and molesting skirts. Two things about Arubans, they could drink and hot Aruban girls mostly come in two's! What would this night hold?

CROWD:
Here and there you saw a non-Aruban but for the most part., 90% Arubans in the house. The ladies came out firing on all cylinders and we never notice fellas so hard luck there boys. Some girls took the carnival thing serious and dressed for the occasion, masks and all.

VENUE/ACCESSIBILITY:
Nice location, close to the train and other public lines. Huge parking lot in walking distance from the venue which was also free. The club was big, too areas one of which many people didn't even know existed. I'm still waiting to hear that story. Nice club though with enough spectacle to make you say "wow."

VIBE:
People were wearing their celebration jackets for sure. The energy took a little while to peak but once it did, never went down and before long the scandalous behaviour began. Girls on the stage, grabbing, groping, gyrating on each other. It's carnival so yeah! 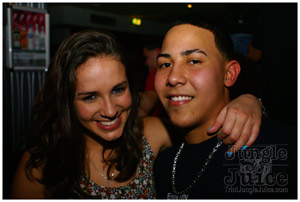 FOOD/DRINK:
Food was exceptional. The little beef patty things were sick. I had my share. The finger food was a major plus. Drinks on the other hand……hmmmmm!. Water down and not up to our standard in no way, shape or form. Paying for a beer but getting 1/4 liquid and 3/4 foam wasn't cutting it. Disappointing indeed. Promoter fix that next time.

SERVICE:
Service was so-so. Nothing too boast or brag about and nothing to really complain about. The staff did their best with what they had and most of all they kept smiling. Even when people was cussing them about getting a glass ah foam.