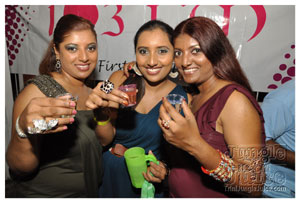 A new year brings forth a new rhythm. Rick City, in collaboration with Club Taj Mahal brought to us all, Rhythms of Carnival 3. Now this was my second time attending this event so expectations of change was in the air. Let's see how things went down.

As I entered the venue of the U.W.I Social club, I was immediately greeted by smiles and screaming ladies because of myself being apart of the TJJ family....well not really. I was greeted by smiles and happy faces though. The screaming ladies part, we got to work a bit harder to get that response. Anyway, when I arrived, the live music of chutney band; BMR Z filled the atmosphere, singing all their hits as well as a couple from Carnival 2011's playlist. They were also joined on stage by Adesh Samaroo, who had the crowd in a frenzy when he say his old school hit "Rum Till I Die." Speaking of atmosphere, some very intriguing scents where distracting me while their performance was going on. Found it rather hard to keep my concentration because my stomach was talking so loud. 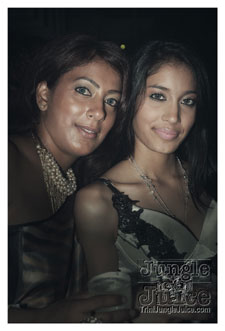 After the band left the stage, I made my way to the scent. A shine, glitter and tear came to my eye when i saw the barrage of food on display, ranging from....I can't remember half of the names, but if i saw them somewhere else, i would definitely recognize it. I do on the other hand distinctively remembered the Curry Corn for reasons. One, was that i was constantly persuaded to taste it, and two, i constantly kept wondering who came up with the idea to mix curry with corn. Oh well.

Next up on the stage was one of the top chutney soca bands in Trinidad & Tobago. None other than Dil-E-Nadan. They had a great response from the crowd. Singing all their hits as well as some of the mainstream pop and soca songs had the crowd really grooving. Lead singer Mr. Raymond Ramnarine also showed the crowd why he is called "Da Show Stoppa" when he demonstrated his musical talents and played the chords from a hit techno song on keyboard. Ok I won't leave you all hanging like that, he played Edward Maya. They really put on a great performance. Then they were joined on stage by Hunter.

After their performance, once again made myself to the food area. What can I say. Jokey Juice loves his belly. 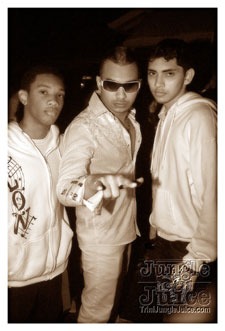 The final band was 3Veni. Now lead singer KI competed the night before in the coveted Chutney Soca Monarch. He may not have had enough votes that night to win the competition, but he surely had the crowds support at U.W.I who constantly cheered his name after every song. He was definitely having a great night.

Respect to Rick and the Rick House promotions, as well as Club Taj Mahal and all sponsors for making this event possible and another success. I personally want to thank all the person's by the food court who tolerated my greedy habits. Once again, this is Jokey Juice signing out asking the question...."Do You Have The Juice?"