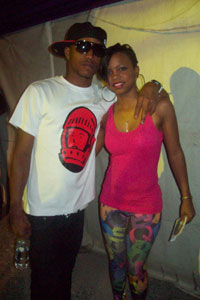 Kingston, Jamaica, March 27, 2011 - Bacchanal Jamaica showed no signs of slowing down on Friday night as Bacchanal Fridays hosted Ladies' Night. As of last Wednesday, Ladies could buy their Bacchanal Fridays pre-sold tickets at a special price of $500 dollars. They were further treated at the gate where the $500 special continued until midnight.

Two for the price of one was the theme for the night as early birds were energized by the clever deejay styles of DJ Richie Ras and DJ Smoke of Renaissance. The most popular hits of this year such as "Wotless" by Kes The Band and "Illegal" a soca-dancehall hit by Machel Montano were on heavy rotation as patrons geared up for the performance.

Just after midnight all eyes turned to the stage as Lil Bitts, the first of two performers for that night, came on to tantalize the crowd. Though small in stature, her big voice made her presence known as she opened the show by taking the crowd back to 2006 with her hit "Carnival Country." Further going down memory lane, Lil Bitts pleasantly surprised the crowd with her 2004 hit "Bump." Making a personal connection with the crowd Lil Bitts challenged patrons up front to a friendly dance competition to see who could "bump" the best to her songs. The highlight was when she fast forwarded to 2011 and performed her newest song "Sweetness". 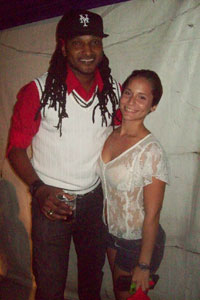 Giving the crowd just enough she exited the stage and made way for DJ Smoke to introduce the next artiste straight from Trinidad. Newcomer Cassi sent the crowd into a frenzy when he immediately took the stage with his crowd pleasing hit "Town Ting." His comedic antics instantly made him a crowd favourite as he even came off the stage and into the crowd for an up close and personal rendition of his 2011 hit.

The DJs contributed to the performance line up as well as DJ Richie Ras and DJ Smoke from Renaissance skillfully schooled the crowd with the new soca songs. While deejaying they highlighted the relevance of songs such as this year’s soca competition winners; Kes’ "Wotless", strong contenders like Iwer’s “Come to Meh”, Faye Ann Lyons’ “Consider it Done” and last lap coolers like Destra’s “Cool It Down”. The transition from the DJs to the live performance stage will unveil over the upcoming weeks of Bacchanal Fridays as all of the artistes mentioned are schedule to perform at Mas Camp. It’s non-stop pace from Bacchanal Jamaica’s line up this year.

Up next is the rhythm section master, Shurwayne Winchester and his Band. Sure to deliver a performance full of energetic waving, masterful wining and eclectic energy delivering his 2011 hits "Paparazzi" and "Manic Monday" along with those popular in Jamaica like “Dead or Alive”, “Don’t Stop” and his 2006 Soca Monarch winning song “Can’t Wait”. Tickets are $1000 pre-sold, $1,200 at the gate.